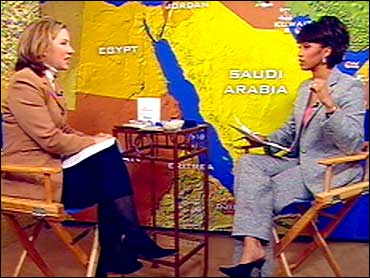 When soldiers are wounded how they are treated on the battlefield can mean the difference between life and death.

The Early Show medical correspondent Dr. Emily Senay took a look at the latest medical devices being used on the front lines.

Dr. Senay says since the first Gulf War, the military has invested a lot of money in creating new medical devices so doctors in the field are better equipped than they have ever been. Many of the advances we've seen are in devices that treat hemorrhaging, which is perhaps the largest preventable cause of death among soldiers.

Here are some examples of progressive medical equipment:

Fast-Clotting Bandages: This is one of a new breed of fast-clotting bandages that was recently given approval by the Food and Drug Administration. They are manufactured by a new company called Hemcon, and they are made from chitosan, which is a shrimp-based product. Dr. Senay says it works by using positively charged chitosan molecules that are attached to the bandage. They attracts negatively charged red blood cells, creating a clot. Researchers say the product is very effective at treating all types of battlefield wounds.

Clotting Powder: This is a quick-clotting powder that goes by the name QuikClot. It induces rapid coagulation of wounds. Dr. Senay says it works by rapidly removing liquid from the blood and stops bleeding almost instantly. QuikClot is poured directly into an open wound. And the clot it creates stays in place until the soldier is brought to a medical facility. Another good thing about this product is that wounded soldiers can apply it directly to themselves.

One-Handed Tourniquet: The Tourniquet has been around forever and in order for one to work effectively, it takes two hands. But with this new device, says Dr. Senay, a soldier takes it out of the bag, slips it through the arm and simply pulls. The one-handed tourniquet was developed by Army researchers. More than 20,000 of the tourniquets have been handed out to U.S. soldiers.

Intraosseous Infusion Device: This device is used to stop blood pressure from dropping to dangerously low levels. Dr. Senay says this sometimes happens when a person loses a great deal of blood. It is filled with fluids, including saline. And it works by punching a hole in the sternum so that the fluids quickly enter the blood stream by bone marrow.

After a soldier has been treated on the battlefield, he or she can go back into action with minor injuries, says Dr. Senay. Others will be sent to the hospital at the nearest base. There are also floating hospitals, including the USS Boxer, which is now stationed in the Northern Persian Gulf. It is equipped to deal with biological and chemical attacks.