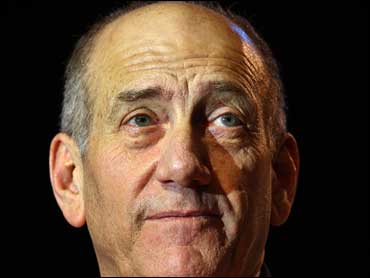 It's a sleazy political corruption drama in which the characters are an American-Jewish businessman and the embattled Prime Minister of Israel. At stake is not just the political future of Ehud Olmert - it's possibly the recently rejuvenated Middle East peace process, CBS News correspondent Mark Phillips reports.

A key witness in the corruption case spent Monday trying to fend off attempts by Olmert's attorneys to undermine his credibility and call his memory into question.

Morris Talansky, the 76-year-old American businessman at the center of the case, answered "I don't know" and "I don't remember" to many of the questions from Olmert's defense lawyers on the fourth day of his cross-examination in a Jerusalem courtroom. At times, Talansky has contradicted himself in his statements to police and in court.

"We funded some expenses; what is wrong with that?" said Morris Talansky while being grilled by Israeli investigators about how much he gave Olmert and what it was used for.

He's admitted to handing Olmert envelops full of cash over a decade - political donations, maybe $150,000 worth, maybe more - his memory is fuzzy, Phillips reports. But Talansky hadn't figured on Olmert's taste for the good life.

Twenty-five thousand of those dollars, for example, spent on a family vacation in Venice.

When Talansky was asked in court why he was so angry, he said: "Because I find out he used the money for himself!"

Talansky testified in May that he transferred hundreds of thousands of dollars to Olmert before he became prime minister, saying he believed some of the money went to fund an extravagant lifestyle of first-class travel and top hotels. The dramatic testimony undermined Olmert's already grim approval ratings and forced his party, Kadima, to schedule new leadership elections for September.

"He liked to travel Business Class or First Class and smoke Cuban cigars and spend his time in suites - and this is not done in Israel," said Israeli Political commentator Akiva Eldar.

The lawyer, Uri Messer, was a top aide to Olmert and had been given power-of-attorney by Talansky.

Talansky also said he did not remember asking his bank not to send him correspondence about one of his accounts, but Tel-Zur produced a document signed by Talanksy to that effect.

"You have lied," the attorney charged.

But one analyst said Olmert's defense team would have to produce more serious questions about Talansky's accusations if they wanted to clear Olmert's name.

"We remember full well the claims by Olmert's defense team that they will destroy Talansky's case," legal affairs reporter Moshe Negbi told Israel Radio. "Notice that they have cracked Talansky's testimony but ... Talansky has not backed down from these things even one millimeter."

No charges have been filed against Olmert. The current proceedings in court are an exceptional measure taken because Talansky lives abroad and prosecutors are not sure he will be able to testify later if a trial is held. Talansky's cross-examination is expected to last at least one more day.

Olmert, already unpopular for his handling of the Lebanese war two summers ago, has been trying to enhance his legacy with recent overtures toward the Palestinians and even putting out peace feelers toward Syria. But the net is closing in, Phillips reports.

"I believe that in the last minute, he will do what Richard Nixon did," Eldar said. "To save some of his reputation ... he will resign."

And he may have to do that soon. His party has already decided to hold a leadership election, intended to replace him, in September.