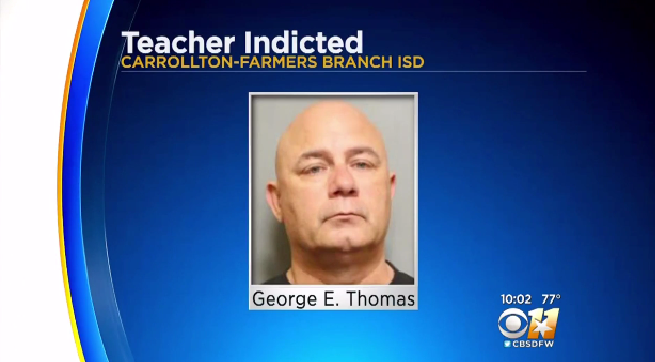 CARROLLTON, Texas -- A Texas high school teacher who allegedly recorded students while they undressed has been indicted, CBS DFW reports.

Thomas recorded at least six female students in various stages of undressing, without their knowledge, during the 2015-16 school year, according to police.

Documents obtained by CBS DFW show that Thomas' girlfriend found the videos on a thumb drive. She later turned them over to police.

Students say they are not surprised to hear about Thomas' arrest.

"I would hear my friends saying that, they were like, something about this teacher doesn't seem right because he was just a little bit off," student Perla Martinez said. "Sometimes, he would seem weird around girls."

Senior Josh Placeres says that when Thomas was his track coach, he would often hear from female athletes that Thomas would have them change clothes in his classroom.

"He just locked himself in the classroom and watched these girls change and watch them stretch," Placeres said.