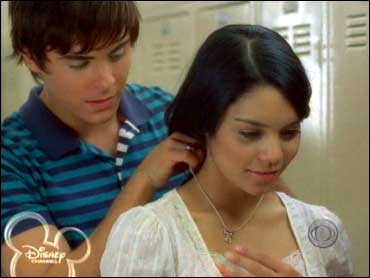 "High School Musical 2" is proving to be more than a made-for-TV movie — it's already a phenomenon.

The sequel combines a hunky basketball star, a beautiful brainiac, and a lot of splashy musical numbers. The result? An instant, bona fide blockbuster.

The show shattered records when it premiered last weekend on the Disney Channel, and its soundtrack album is flying off shelves.

In just one week, the soundtrack shot to No. 1 on the Billboard charts, selling 615,000 copies.

"It has a very good shot at being the top-selling album of the year," observes Entertainment Weekly's Chris Willman.

Also enjoying a resurgence, the music from the first film, which jumped from the 28th slot last week to No. 16.

"I think that was almost a little embarrassing for the music business," Willman says, "that the No. 1 album was not some band that was coming back to save rock 'n' roll, but it was undeniable, and the songs were actually good."

It was pandemonium at the film's premiere, with heartthrob Zac Efron getting most of the attention from fans.

When a reporter at a news conference marking the premiere remarked that Efron "must have moments when you think this is absolutely insane," he kiddingly replied, "Like right now!"

"I'm kind of pinching myself all day," he told the assembled media members, "but, after that, I'll go home to do pretty much normal things. I'm a regular kid."

"The chemistry that's there on-screen, to find out that it was real is kind of cute and sweet," Willman says.

With the franchise racking in hundreds of millions of dollars, plans are in the works for a third film, this time a big-screen version.

"We found something here that is special to all of us," Efron said. "It's just fun to make. How could you not want to do another one?"

There are rumors that the feature film will be a scary one.

Next up for the cast — heading across the pond to premiere "High School Musical 2" in London.