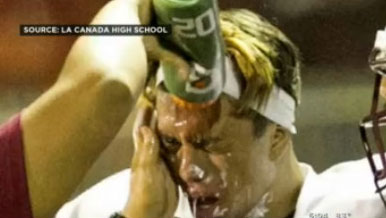 LOS ANGELES --A high school football player in California is being accused of smearing Icy-Hot in an opposing player's face during a game, reports CBS Los Angeles.

Angel Salazar, a player for La Canada High School, was playing Salesian High School when the alleged incident occurred. In a video, a Salesian player appears to reach under Salazar's face mask and smear the heat-rub substance on his face.

"Our player came to the sidelines, and he was covered in Icy-Hot. Covered in his face," said La Canada Principal Ian McFeat to CBS LA.

McFeat said they are sharing the video and images with the media so it hopefully doesn't happen to any other athletes.

"That's the kind of substance that if it really got in your eyes, it can do some damage," McFeat added.

"When you're an athlete, you're constantly feeling like your job is on the line. There's always a question of are you going to get to play today," Ho added.

But Ho says, phone cameras are making it easier to document incidents like the one at La Canada. And this incident is nothing new.

Earlier this month, two high school football players deliberately tackled a referee during a game. It happened in Marble Falls, Texas during a 15-9 win by the home team.

One of the John Jay High School players is seen on video running into the back of the referee as he watched a play, and the other dove into the official. Both took running starts.

The player's claimed during a national broadcast interview last week that their coach directed them to strike the referee because of missed calls that had hurt the team. One player also contends that the ref used a racial slur towards a black player, a claim the referees lawyer adamantly disputes.

Just last week, a football player from New Jersey also found himself in hot water after he was caught with an opposing players helmet in his hands, and then used that helmet to strike the player in the head.