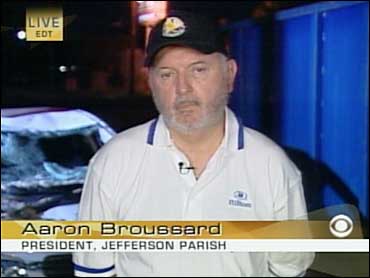 We heard from Aaron Broussard this morning, reacting to President Bush's speech last night on hurricane Katrina. Broussard is the president of Jefferson Parish, a bedroom community of a half million right next to New Orleans. President Broussard became famous when he said to Tim Russert, "We've been abandoned by our own country."

I saw him a couple of days later at his emergency management office, where he said of the feds, "Just send me a better idiot than the first one you sent." He is a master politician. Against the wishes of all the experts he allowed his citizens back into his parish last week to collect what they needed from their homes, then clear out until he could get things fixed up.

Well he told us today he's gonna beat his own goal and let his folks back in way ahead of schedule. Of the president, he said it was Bush's best speech outside of war time. High praise for a man who's been so critical of the initial response. As for the storm, he was philosophical. He said man's job is to overcome Mother Nature's obstacles. But, Mother Nature sure can be a -- well, it rhymes with witch.