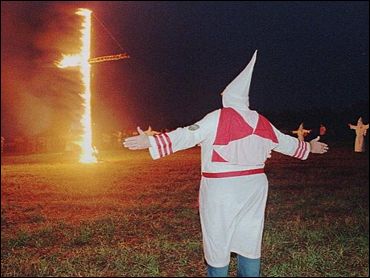 A divided Supreme Court upheld a state ban on cross burning, ruling Monday that the history of racial intimidation attached to this symbol outweighs the free speech protection of Ku Klux Klansmen or others who might it.

A burning cross is an instrument of terror, and government should have the power to stamp out or punish its use, Justice Sandra Day O'Connor wrote.

"The protections afforded by the First Amendment ... are not absolute," O'Connor wrote for herself and four other justices.

"The essence of this ruling is that cross-burning is different from other forms of symbolic speech," said CBSNews.com Legal Analyst Andrew Cohen. "The way it has been used in American history puts it almost uniquely into a category that allows the government to punish people who choose to communicate a message in this fashion."

Justice Clarence Thomas, the court's only black member, dissented, but made clear his reasons have nothing to do with protecting free speech rights of the Klan.

Thomas said the court didn't even have to consider the First Amendment implications because cross burning is clearly intimidation.

"Just as one cannot burn down someone's house to make a political point and then seek refuge in the First Amendment, those who hate cannot terrorize and intimidate to make their point," he wrote.

"In our culture, cross burning has almost invariably meant lawlessness and understandably instills in its victims well-grounded fear of physical violence," Thomas said.

At issue was a 50-year-old Virginia law that makes it a crime to burn a cross as an act of intimidation. A lower court ruled that the law muzzled free speech.

"This decision cuts a bit into the free speech protections of the First Amendment but it does so in a way that isn't likely to blow away those protections," said Cohen. "The justices in the majority made it clear that they came down the way they did because cross-burning is such an historically heinous act — and that's a test that won't apply to most symbolic speech cases in the future."

"While a burning cross does not inevitably convey a message of intimidation, often the cross burning intends that the recipients of the message fear for their lives," O'Connor wrote for the 5-4 majority in Monday's ruling. "And when a cross burning is used to intimidate," she wrote, "few if any messages are more powerful."

"The case generated a majority decision by an unusual coalition of the Court's most conservative and liberal members — you don't see Justices Scalia and Stevens agreeing on much of anything but they did in this case," said Cohen, "and the ruling is likely to encourage other states that endure cross-burning to enact similar laws like the one Virginia enacted over half a century ago."

The Supreme Court historically has been protective of First Amendment rights of unsavory or unpopular groups and causes, including the Klan, flag burners, pornographers and strippers.

More than a decade ago, the court struck down a local law in St. Paul, Minn., that prohibited placing symbols including a burning cross or a swastika on someone else's property out of racial, religious or other bias.

The cross-burning case in Virginia evoked a mostly bygone era in the South, when nightriders set crosses ablaze as a symbol of intimidation to blacks and civil rights sympathizers. Virginia and other states tried to outlaw the practice, but the laws have run into trouble on free-speech grounds.

During oral arguments in the case in December, Thomas recalled what he called a century-long "reign of terror" by the Klan and other white supremacy groups, and called the flaming cross "unlike any symbol in our society."

"The cross was a symbol of that reign of terror," Thomas said in apparent exasperation that a government lawyer was providing only tepid, legalistic justification for the Virginia law.

"My fear is...that you're actually underestimating the symbolism of, and the effect of, the cross, the burning cross," Thomas said at the time.

The moment was electric, in part because Thomas almost never speaks during the court's oral arguments, and because of his race.

The case began five years ago, with two separate prosecutions for burning a cross.

In one case, two white men in Virginia Beach, Va., ended a night of partying by trying to burn a 4-foot cross in the yard of a black neighbor, James Jubilee. Jubilee later moved his family out of the neighborhood because of concern for their safety.

In the other case, a Pennsylvania Klan member man was convicted of burning a 30-foot cross on private land in rural southern Virginia during a 1998 Klan rally.

Lawyers for the commonwealth of Virginia told the court the Klan rally was held after whites became angry about mixed-race couples.