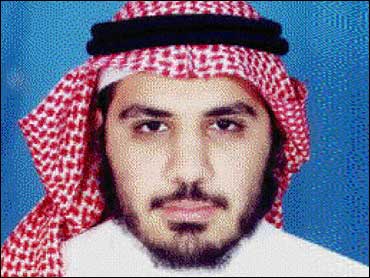 The U.S. Supreme Court expanded its review of government anti-terrorism measures Friday, agreeing to hear the case of a U.S.-born man with Saudi parents captured during the fighting in Afghanistan and held incommunicado and without charges.

The high court said it will consider the appeal from Yaser Esam Hamdi, whom the government has labeled an enemy combatant ineligible for ordinary legal protections and a danger to the United States.

CBS News Correspondent John Hartge reports this is considered a test case on the Bush administration's handling of enemy combatants. It is the second major terrorism-related case the high court will hear this term.

The court will probably hear the Hamdi case in April, with a ruling expected by July.

The high court's decision to review the case is another in a recent series of legal setbacks for the Bush administration in terrorism cases. The administration had strongly urged the high court to stay out of the Hamdi case, or to shelve it for now pending an appeal in the similar case of another U.S.-born terrorism suspect.

"This is an enormous step forward for the Supreme Court and it's hard to see how the Court's ruling won't be monumental — either the justices will significantly limit the president's power over U.S. citizens or they will endorse that power," said CBS News legal analyst Andrew Cohen.

The administration won its argument in a lower court that Hamdi may be held indefinitely and without the usual legal rights due to U.S. citizens, and wanted that ruling to stand.

Hamdi's father filed a civil liberties challenge on his son's behalf, and a lawyer who has never met Hamdi is pressing the case at the Supreme Court.

The lower federal appeals court not only "embraced an unchecked executive power to indefinitely detain American citizens suspected of being affiliated with enemies, but it also abandoned procedural safeguards designed to promote truth and fairness."

In response, the Bush administration's top Supreme Court lawyer called Hamdi a prime example of a dangerous terror suspect who should be locked up.

"Hamdi is a classic battlefield detainee — captured in Afghanistan, an area of active combat, with an enemy unit," Solicitor General Theodore Olson told the court.

Despite that argument, the government recently agreed to allow Dunham to visit his would-be client. The government still contends Hamdi is not constitutionally entitled to a lawyer, and that question will still be a part of the Supreme Court case.

Officials decided to grant the access to a lawyer because Hamdi is a U.S. citizen and the military has finished interrogating him, the Pentagon said last month. Hamdi has not been charged with any crime.

The move was seen at the time as an attempt to blunt criticism of government anti-terror tactics, and a way to improve the government's legal standing at the Supreme Court. The meeting has not yet taken place.

Earlier this week, Olson asked the justices to put off consideration of the Hamdi case, at least until the government finishes a hurry-up appeal in the similar case of Jose Padilla, a former gang member seized in Chicago in an alleged plot to detonate a radioactive "dirty bomb." Padilla was declared an enemy combatant and like, Hamdi, eventually transferred to the South Carolina naval prison.

The administration plans an appeal in the Padilla case by Jan. 20, and had suggested that the justices consider the two cases together.

The court did not address that request in its brief order granting review in the Hamdi case. It is not clear now whether the court will also agree to hear the Padilla appeal when it comes. The two cases raise slightly different constitutional issues, because Hamdi was captured abroad and Padilla was picked up on U.S. soil.

The Padilla case represents one of the largest legal losses for the administration since the Sept. 11 2001 terrorist attacks.

A New York federal appeals court ruled last month that President Bush lacks the authority to declare Padilla an enemy combatant and hold him in open-ended military custody. The 2nd U.S. Circuit Court of Appeals gave the government 30 days to release Padilla or try him in a civilian court.

Cohen said it is possible the Supreme Court will take up the Padilla case, now that it has accepted the Hamdi case.

The Supreme Court has already agreed to hear a challenge from foreigners who, like Hamdi, were seized overseas as suspected al Qaeda terrorist or Taliban fighters. Some 650 foreigners are held at the U.S. naval prison camp at Guantanamo Bay, Cuba, without charges and until recently, with no access to lawyers.

Over objections from the Bush administration, the high court said in November that it will decide if those detainees may challenge their treatment and detention in U.S. courts. One detainee has been given a lawyer since the high court agreed to hear the case.

A ruling in the Guantanamo case is also expected by summer.

Ali Saleh Kahlah Al Marri, a man from Qatar, has also been designated as an enemy combatant of the United States for allegedly paving the way for al Qaeda operatives to settle in America.