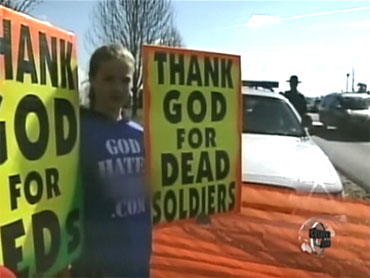 WASHINGTON - The Supreme Court ruled Wednesday that the First Amendment protects fundamentalist church members who mount anti-gay protests outside military funerals, despite the pain they cause grieving families.

The court voted 8-1 in favor of the Westboro Baptist Church of Topeka, Kan. The decision upheld an appeals court ruling that threw out a $5 million judgment to the father of a dead Marine who sued church members after they picketed his son's funeral.

The justices said the speech was protected because the protests were on a matter of public concern, on public property and conducted in a peaceful manner, CBS News chief legal analyst Jan Crawford reports.

"Speech is powerful. It can stir people to action, move them to tears of both joy and sorrow, and -- as it did here -- inflict great pain. On the facts before us, we cannot react to that pain by punishing the speaker," Roberts said. "As a nation we have chosen a different course -- to protect even hurtful speech on public issues to ensure that we do not stifle public debate."

"Our profound national commitment to free and open debate is not a license for the vicious verbal assault that occurred in this case," he said.

Matthew Snyder died in Iraq in 2006 and his body was returned to the United States for burial. Members of the Westboro Baptist Church, who have picketed military funerals for several years, decided to protest outside the Westminster, Md., church where his funeral was to be held.

The Rev. Fred Phelps and his family members who make up most of the Westboro Baptist Church have picketed many military funerals in their quest to draw attention to their incendiary view that U.S. deaths in Afghanistan and Iraq are God's punishment for the nation's tolerance of homosexuality.

They showed up with their usual signs, including "Thank God for dead soldiers," "You're Going to Hell," "God Hates the USA/Thank God for 9/11," and one that combined the U.S. Marine Corps motto, Semper Fi, with a slur against gay men.

The church members drew counter-demonstrators, as well as media coverage and a heavy police presence to maintain order. The result was a spectacle that led to altering the route of the funeral procession.

Several weeks later, Albert Snyder was surfing the Internet for tributes to his son from other soldiers and strangers when he came upon a poem on the church's website that attacked Matthew's parents for the way they brought up their son.

Soon after, Snyder filed a lawsuit accusing the Phelpses of intentionally inflicting emotional distress. He won $11 million at trial, later reduced by a judge to $5 million.

The federal appeals court in Richmond, Va., threw out the verdict and said the Constitution shielded the church members from liability.

While distancing themselves from the church's message, media organizations, including The Associated Press, urged the court to side with the Phelps family because of concerns that a victory for Snyder could erode speech rights.

Roberts described the court's holding as narrow, and in a separate opinion, Justice Stephen Breyer suggested in other circumstances, governments would not be "powerless to provide private individuals with necessary protection."

But in this case, Breyer said, it would be wrong to "punish Westboro for seeking to communicate its views on matters of public concern."

Margie Phelps, a daughter of the minister and a lawyer who argued the case at the Supreme Court, said she expected the outcome. "The only surprise is that Justice Alito did not feel compelled to follow his oath," Phelps said. "We read the law. We follow the law. The only way for a different ruling is to shred the First Amendment."

Phelps told CBS News that the church would continue to picket funerals and "tell this nation: obey or perish."

"The entire United States military has tried to shut up this little church but at the end of the day, thank God for dead soldiers," she said.

Snyder thinks that someone will get hurt if the protests continue.

"When the government won't do anything about it, and the courts give us no remedy, then people are going to start taking matters into their own hands. And believe me someone is going to get hurt," Snyder told CBS News anchor Katie Couric. "And when the blood starts flowing, let it be on the Supreme Court Justices' hands."