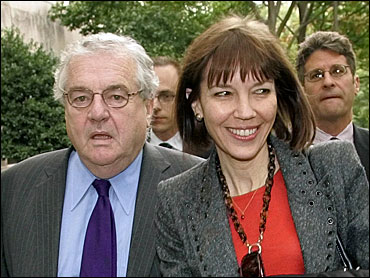 The Supreme Court ruled against The New York Times on Monday, refusing to block the government from reviewing telephone records of two Times reporters in a leak investigation concerning a terrorism-funding probe.

The one-sentence order came in a First Amendment battle that involves stories written in 2001 by Times reporters Judith Miller and Philip Shenon. The stories revealed the government's plans to freeze the assets of two Islamic charities, the Holy Land Foundation and the Global Relief Foundation.

U.S. Attorney Patrick Fitzgerald is trying to track down the reporters' confidential sources for the stories. Fitzgerald's spokesman, Randall Samborn, declined to comment on the Supreme Court's order.

The case marks the second refusal by the court in as many years to sort out a clash between the federal government and the Times over press freedom.

In June 2005, the Supreme Court refused to take up the Times' request to hear an appeal in the CIA leak investigation involving the outing of Valerie Plame. In that case, Miller, who retired from the Times a year ago, spent 85 days in jail before agreeing to testify before a federal grand jury. Fitzgerald, in a role as a special counsel, conducted that leak investigation as well.

Monday's rejection "is just further indication that we're getting absolutely nowhere with the court when it comes to protecting confidential sources," said Lucy Dalglish, executive director of the Reporters Committee for Freedom of the Press.

The case points out a growing problem of reporters trying to protect their sources in the information age, press advocates say. Rather than threatening reporters with jail if they don't testify, the government can go through the back door to hunt down confidential sources by amassing phone records and credit-card receipts.

"It's impossible to operate on cash only and face-to-face and do your job as journalists," said University of Minnesota media ethics and law professor Jane E. Kirtley.

Dalglish said protection of phone record confidentiality is among the issues that should be addressed in federal shield law legislation she and other media advocates are urging Congress to consider.

Floyd Abrams, a lawyer for the Times, said the current case is part of a larger dispute over the public's right to information.

"We remain hopeful that in the end, whether in the courts or in Congress, that right will be vindicated," Abrams said.

The current dispute stems from Shenon and Miller calling the two charities for comment after learning of the planned freeze on their assets from confidential sources.

In August, the 2nd U.S. Circuit Court of Appeals ruled 2-1 that federal prosecutors could see the two reporters' phone records.

The government says the fact that the reporters relayed disclosures from a government source to "targets of an imminent law enforcement action substantially weakens any claim of freedom of the press."

At issue are 11 days of phone records the government plans to review from 2001 — for the dates Sept. 27-30, Dec. 1-3 and Dec. 10-13. In a declaration this month, Fitzgerald said the statute of limitations "on certain substantive offenses that the grand jury is investigating" will expire on Dec. 3 and Dec. 13 of this year.