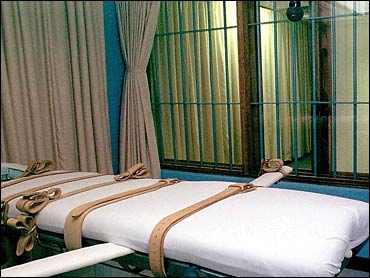 
There is a saying in Texas: you mess with the bull, you get the horns. Right now the appellate courts of Texas, both state and federal, are messing with the United States Supreme Court on the issue of the death penalty. It's a war those lower courts certainly will lose; it's a battle that for many reasons they shouldn't even fight.

As chronicled in depth in Sunday's New York Times, the highest court in the land is locked in a battle with the 5th U.S. Circuit Court of Appeals and the Texas Court of Criminal Appeals over how capital cases ought to play out in court.

The lower appeals' courts keep affirming capital convictions generated after dubious trials. The Justices keep rejecting the lower courts' reasoning and sending the cases back down for fixing. Then, instead of loyally following the High Court's rationale, the lower courts keep coming back with new reasons (or in some cases, the same old reasons) for affirming the convictions.

It's a cycle that can only end poorly for capital punishment supporters in Texas and elsewhere. In fact, if Texas, the death penalty capital of America, wants to inadvertently (and quite ironically) dispense with or merely suspend capital punishment in the United States, it is well on its way.

By antagonizing the Justices to this extraordinary extent, the lower courts are simply lending support to those on the High Court who believe that capital punishment procedures - from the way capital juries are selected to the way appeals court review cases - are teetering on the brink of unconstitutionality.

Several swing Justices, including - famously - Justice Sandra Day O'Connor, have in the past expressed growing concern not at the concept of capital punishment itself but at the way in which it is enforced and implemented.

Capital punishment isn't nearly as endangered on the Court as abortion rights are; but in its present form (i.e. with current procedures in place and the spate of news stories about innocent men being condemned), it is not in nearly as strong a legal position as its most ardent supporters think it is.

Given that context, why would the lower courts want to keep reminding the Justices about how arbitrary capital cases can be, especially in the South? Why wouldn't those lower courts go out of their way to keep the Supreme Court confident that the rules in capital cases are and can be fairly enforced and judiciously implemented?

Not for 50 years - since the bogus theory of interposition made its last stand in the law during the Southern civil rights fights - have lower courts thumbed their noses so blatantly at the Justices.

The reason for this column - and for the Times' lengthy take on the topic - is that the Justices Monday heard oral arguments in a capital case out of Texas that has become the symbol for the intra-court fight over the death penalty.

This is the second time this particular case, Miller-El v. Dretke, has found its way to the High Court. The case initially caught the attention of the Justices because there was some proof that prosecutors in the case purposely sought to prevent black people from sitting in judgment on Miller-El, who is black.

The suspicion of this proof was "strong" enough last year to persuade the Justices, in a 8-1 vote, to send the case back down the legal chain with instructions to the lower courts to rethink their conclusions about racial bias in the case, which of course the Constitution precludes.

Usually, when the Justices send down such a missive in such direct terms, it means an automatic reversal by the lower court, which like it or not, usually turns around, reverses the conviction, and then says: "We are just following what the Highest Court in the land has ordained."

Not this time. In this case, the federal appeals court simply affirmed the conviction again, relying upon the words of Justice Clarence Thomas, the lone dissenting judge in that 8-1 majority that had sent the case back down in the first place.

That's the legal equivalent to awarding the Vince Lombardi trophy to the team that gets it butt kicked in the Super Bowl. Which is why, on Monday, Justice Stephen G. Breyer had the good sense to ask the Texas attorney general arguing the case: "I'm reading the opinion and thinking, unless something changes here, this is something bad, this is discriminatory. Is there something different found in the 5th Circuit that wasn't here the last time?"

The answer to that question, of course, is "no," which is why the Justices this time around are much more likely simply to themselves reverse Miller-El's conviction rather than try to rely again upon the intransigent lower courts.

And if and when they do so, they likely will tweak death penalty law in a way that won't thrill capital punishment supporters. The Court recently has precluded capital punishment for mentally retarded killers and now is considering the same ban for juvenile murderers.

The Miller-El case, the way it went down at trial and the way it has gone up on appeal, gives the Justices yet another reason to tinker with capital procedures more broadly. We won't see an outright ban on the death penalty - there isn't a single Justice on the Court who is against it in all circumstances - but the Miller-El case ultimately may make it harder to get a capital conviction and then to defend that conviction on appeal. Think that's what the Texas courts are hoping for? Me neither.

Wave the flag in front of the bull enough times and sooner or later that bull is going to get to work. The Supreme Court is closer to limiting the scope of capital punishment in this country thanks to the defiance of a whole group of people who ought to know better.

So if you don't like the big ruling when it comes down next June, don't blame the Justices. Blame the judges at the 5th Circuit and the ones sitting on the Texas Court of Criminal Appeals. They are the ones who are just asking to get gored.