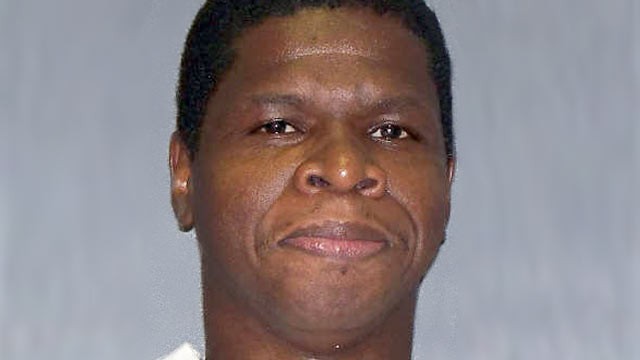 HUNTSVILLE, Texas - The U.S. Supreme Court halted the execution Thursday of a black man convicted of a double murder in Texas 16 years ago after his lawyers contended his sentence was unfair because of a question asked about race during his trial.

Duane Buck, 48, was spared from lethal injection when the justices, without extensive comment, said they would review an appeal in his case. Two appeals, both related to a psychologist's testimony that black people were more likely to commit violence, were before the court. One was granted; the other was denied.

His lawyers called to tell Buck of the reprieve and the inmate was praying in his cell when Clark approached, Clark said.

The reprieve came nearly two hours into a six-hour window when Buck could have been taken to the death chamber. Texas officials, however, refused to move forward with the punishment while legal issues were pending.

A similar request for a reprieve was made to Texas Gov. Rick Perry. Perry is the Republican frontrunner for the GOP presidential nomination and his actions have now come under closer scrutiny. Perry, however, wasn't in the state Thursday and any decision on a reprieve from the governor's office would have fallen to Lt. Gov. David Dewhurst.

CBS Radio News senior legal analyst Andrew Cohen reports that the Supreme Court's move is a surprise because they rarely intervene in death penalty cases where the guilt of the defendant is not in doubt. The Justices were most likely concerned about the promises Texas had earlier made to defendants like Buck whose capital trials were tainted by racial testimony.

The Supreme Court has only called for a stay in the execution. It has not yet given Buck a new sentencing trial, which is what his attorneys had sought after his first trial was tainted by unconstitutional testimony about his race. Even Texas had initially agreed his trial was unfair.

Buck's attorneys asked Gov. Perry and the district attorney in the case to grant him a new trial like the other defendants whose trials had been tainted by prejudcial racial testimony. But Texas had rejected those requests.

In a statement, one of Buck's attorney, Kate Black said: "We are relieved that the U.S. Supreme Court recognized the obvious injustice of allowing a defendant's race to factor into sentencing decisions and granted a stay of execution to Duane Buck. No one should be put to death based on the color of his or her skin. We are confident that the Court will agree that our client is entitled to a fair sentencing hearing that is untainted by considerations of his race."

Buck's lawyers based their appeal in part on a question about race that was asked during the punishment phase of his capital murder trial.

Buck's case is one of six convictions that then-Texas Attorney General John Cornyn -- a political ally of Perry who is now a Republican U.S. senator -- reviewed in 2000 and said needed to be reopened because of the racially charged statements made during the sentencing phase of the trial. A psychologist told jurors that black criminals were more likely to pose a future danger to the public if they are released.

The Texas attorney general's office says there was no error.

Gov. Perry is an ardent supporter of capital punishment. During his 11 years in office, 235 convicted killers have been put to death in Texas. His office says he has chosen to halt just four executions, including one for a woman who was later put to death.

In the five other cases Cornyn said needed to be reopened, prosecutors repeated the sentencing hearings and the defendants were again sentenced to death. Prosecutors contend Buck's case was different from those and that the racial reference was a small part of a larger testimony about the prison population.

Buck was convicted of gunning down ex-girlfriend Debra Gardner, 32, and Kenneth Butler, 33, outside Houston in July, 30, 1995, a week after Buck and Gardner broke up. Buck's guilt is not being questioned, but his lawyers say the jury was unfairly influenced and that he should receive a new sentencing hearing.

A third person, Buck's stepsister, Phyllis Taylor, also was wounded, though she has since forgiven Buck and sought for his death sentence to be commuted to life in prison.

Gardner's 14-year-old daughter and 11-year-old son were among those who witnessed the shootings. Officers testified that Buck was laughing during and after his arrest, saying Gardner deserved what she got.

The Texas Board of Pardons and Paroles, all of whom are Perry appointees, denied Buck's clemency request Wednesday, and the 5th U.S. Circuit Court of Appeals subsequently rejected his appeal.

Buck's lawyers contend the case was "tainted by considerations of race" after psychologist Walter Quijano testified in response to a question from lead prosecutor Joan Huffman that black criminals are more likely to be violent again in the future. Whether or not someone could be a continuing threat to society is one of three questions Texas jurors must consider when deciding on a death sentence.

Cornyn said in a news release in 2000 that a half-dozen capital case sentences, including Buck's, needed review because of Quijano's testimony at their trials.

Lucy Nashed, a spokeswoman for Perry, said that because the governor will be out of state, Lt. Gov. David Dewhurst will preside over the execution. She declined to comment further about Buck's case.

Any final order to delay would technically come from Dewhurst. However, Perry's office frequently points out that Perry remains the governor and in contact with Austin while traveling. Dewhurst spokesman Mike Walz said the lieutenant governor does not comment on pending executions.

Huffman, now a state senator and one of Perry's closest allies in the Legislature, defended asking Quijano the racially charged question, saying, "I have absolutely no concern whatsoever." She noted that Quijano was a defense witness, her question came in reference to a report he prepared for the defense and the issue was raised just once.

However, Huffman's assistant prosecutor in the case, Linda Geffin, had joined the call for a new sentencing hearing, saying Wednesday that "race should never be put in front of a jury in any case, particularly a death penalty case."

The execution would be the second this week and the 11th this year in Texas. Two more Texas prisoners are set to die next week.