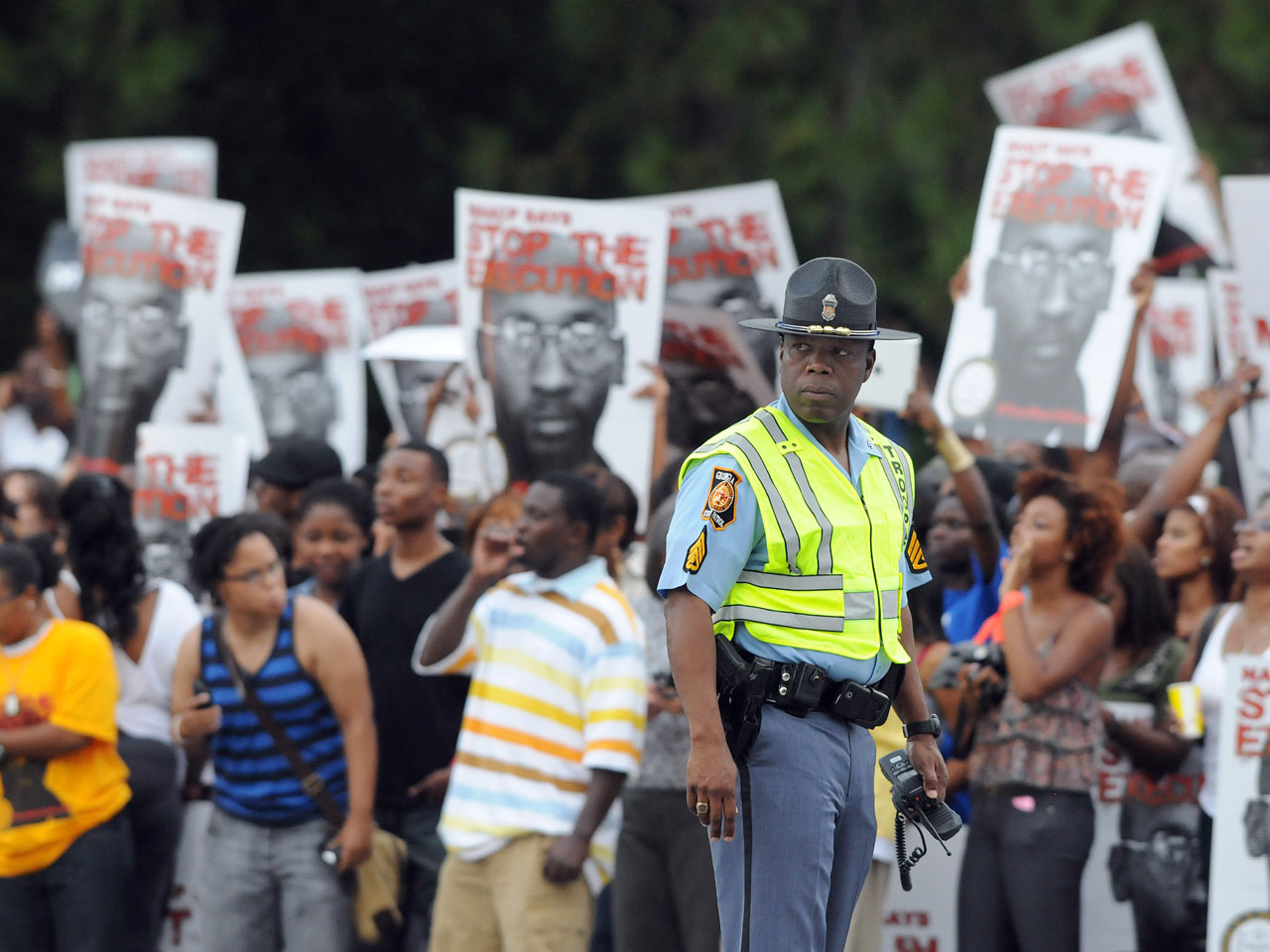 JACKSON, Georgia - The Supreme Court late Wednesday rejected an 11th-hour request to block the execution of Troy Davis, who convinced hundreds of thousands of people but not the justice system of his innocence in the murder of an off-duty police officer.

The court did not comment on its order late Wednesday, four hours after receiving the request. CBS News correspondent Jan Crawford reports there were no dissenting opinions on the court in denying Davis' request. Davis' execution had been set to begin at 7 p.m., but the high court's decision was not issued until after 10 p.m.

"It is killing me, to tell you the truth. I don't know what to expect anymore," said Anneliese MacPhail, mother of Mark MacPhail, the man Davis was convicted of killing in 1989.

Though Davis' attorneys say seven of nine key witnesses against him have disputed all or parts of their testimony, state and federal judges have repeatedly ruled against granting him a new trial. As the court losses piled up Wednesday, his offer to take a polygraph test was rejected and the pardons board refused to give him one more hearing.

Davis' supporters staged vigils in the U.S. and Europe, declaring "I am Troy Davis" on signs, T-shirts and the Internet. Some tried increasingly frenzied measures, urging prison workers to stay home and even posting a judge's phone number online, hoping people will press him to put a stop to the lethal injection. President Barack Obama deflected calls for him to get involved.

"They say death row; we say hell no!" protesters shouted outside the Jackson prison where Davis was to be executed. In Washington, a crowd outside the Supreme Court yelled the same chant.

The crowd outside the prison swelled to more than 500 as night fell and a few dozen riot police stood watch. About 10 counterdemonstrators also were there, showing support for the death penalty and MacPhail's family.

"He had all the chances in the world," Anneliese MacPhail said of Davis in a telephone interview. "It has got to come to an end."

At a Paris rally, many of the roughly 150 demonstrators carried signs emblazoned with Davis' face. "Everyone who looks a little bit at the case knows that there is too much doubt to execute him," Nicolas Krameyer of Amnesty International said at the protest.

Davis' execution has been stopped three times since 2007, but on Wednesday the 42-year-old appeared to be out of legal options.

As his last hours ticked away, an upbeat and prayerful Davis turned down an offer for a special last meal as he met with friends, family and supporters.

"Troy Davis has impacted the world," his sister Martina Correia said at a news conference. "They say, `I am Troy Davis,' in languages he can't speak."

Correia, who is battling breast cancer and using a wheelchair as she helps coordinate rallies and other events, called on people to push for change in the justice system. Then she said, "I'm going to stand here for my brother," and got up with help from people around her.

His attorney Stephen Marsh said Davis would have spent part of Wednesday taking a polygraph test if pardons officials had taken his offer seriously.

"He doesn't want to spend three hours away from his family on what could be the last day of his life if it won't make any difference," Marsh said.

"I'm trying to bring the word to the young people: There is too much doubt," rapper Big Boi, of the Atlanta-based group Outkast, said at a church near the prison.

The U.S. Supreme Court gave Davis an unusual opportunity to prove his innocence in a lower court last year, though the high court itself did not hear the merits of the case.

He was convicted in 1991 of killing MacPhail, who was working as a security guard at the time. MacPhail rushed to the aid of a homeless man who prosecutors said Davis was bashing with a handgun after asking him for a beer. Prosecutors said Davis had a smirk on his face as he shot the officer to death in a Burger King parking lot in Savannah.

Witnesses placed Davis at the crime scene and identified him as the shooter, but several of them have recanted their accounts and some jurors have said they've changed their minds about his guilt. Others have claimed a man who was with Davis that night has told people he actually shot the officer.

"Such incredibly flawed eyewitness testimony should never be the basis for an execution," Marsh said. "To execute someone under these circumstances would be unconscionable."

State and federal courts, however, have repeatedly upheld Davis' conviction. One federal judge dismissed the evidence advanced by Davis' lawyers as "largely smoke and mirrors."

"He has had ample time to prove his innocence," said MacPhail's widow, Joan MacPhail-Harris. "And he is not innocent."

The latest motion filed by Davis' attorneys in Butts County Court disputed testimony from the expert who linked the shell casings to the earlier shooting involving Davis, and challenged testimony from two witnesses. Superior Court Judge Thomas Wilson and the Georgia Supreme Court rejected the appeal, and prosecutors said the filing was just a delay tactic.

The National Association for the Advancement of Colored People, which has helped lead the charge to stop the execution, said it was considering asking President Barack Obama to intervene.

Obama cannot grant Davis clemency for a state conviction. Richard Dieter, executive director of the Death Penalty Information Center, said he could halt the execution by asking for an investigation into a federal issue if one exists.

Press secretary Jay Carney issued a statement saying that although Obama "has worked to ensure accuracy and fairness in the criminal justice system," it was not appropriate for him "to weigh in on specific cases like this one, which is a state prosecution."

Dozens of protesters outside the White House called on the president to step in, and about 12 were arrested for disobeying police orders.

Davis was not the only U.S. inmate scheduled to die Wednesday evening. In Texas, white supremacist gang member Lawrence Russell Brewer was put to death for the 1998 dragging death of a black man, James Byrd Jr., one of the most notorious hate crime murders in recent U.S. history.

Davis' best chance may have come last year, in a hearing ordered by the U.S. Supreme Court. It was the first time in 50 years that justices had considered a request to grant a new trial for a death row inmate.

The high court set a tough standard for Davis to exonerate himself, ruling that his attorneys must "clearly establish" Davis' innocence -- a higher bar to meet than prosecutors having to prove guilt. After the hearing judge ruled in prosecutors' favor, the justices didn't take up the case.

The planned execution has drawn widespread criticism in Europe, where politicians and activists made last-minute pleas for a stay.

Spencer Lawton, the district attorney who secured Davis' conviction in 1991, said he was embarrassed for the judicial system -- not because of the execution, but because it has taken so long to carry out.

"What we have had is a manufactured appearance of doubt which has taken on the quality of legitimate doubt itself. And all of it is exquisitely unfair," said Lawton, who retired as Chatham County's head prosecutor in 2008. "The good news is we live in a civilized society where questions like this are decided based on fact in open and transparent courts of law, and not on street corners."