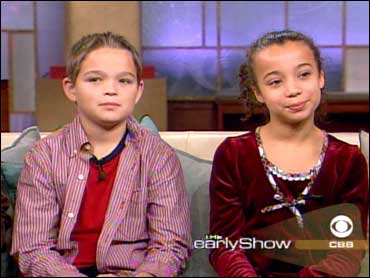 When you're a kid, there are few things worst than being different from everyone else. So imagine growing up with a disease that can make you stand out, even if you don't want to.

In the new HBO documentary, "I Have Tourette's But Tourette's Doesn't Have Me," kids with Tourette syndrome share the ups and downs of living with it.

"Having Tourette's doesn't make you different from anybody else," 10-year-old Aungeni Saxon wants other kids to know. "Just some kids are born with it. Anybody can have it. It's not really weird or anything. It's something where a part of your brain is not working. I can still be the same as you, even though I do different things."

Dr. John Walkup, a child psychiatrist at Johns Hopkins University School of Medicine and an expert on Tourette syndrome explains it as a "neuro-psychiatric disorder that presents in childhood."

And even though the average age of diagnoses is seven, he explains symptoms can appear as early as age 2 or 3.

"Kids don't start to have tics until 6 or 7 and it is very unusual for the tics to start after age 16 or 17," he says. "The tics include motor tics like eye blinking or rolling your eyes to the side, others include head shaking, shoulder shrugs. There are complicated motor tics such as hopping, touching the floor. Vocal tics include grunts (a muscle contraction). They say words or phrases. It's very rare for kids to utter racial or swear words, which is the most popular symptom people think of when it comes to Tourette."

For Aungeni it has been hard to make friends sometimes.

"They think the things that I do are weird," she says, "when I twitch my leg, when I push on my stomach or jerk my head."

But those tics are very difficult to control, says Dr. Walkup. And though it gets better as children get older, the way most people deal with their condition is to find a way to hide and manage the tics.

"I'll take my pencil and I'll put it under my desk, and I'll go on the floor and do all the tics I have to do," Aungeni says. "Somebody will tell me, 'Get off the floor.' And I'll just kick my pencil a little farther because I have to do more. Then I get my pencil, and I get back in my chair, and I start working again."

Dr. Walkup points out: "Most of the time, education is extraordinarily helpful — talking with teachers, talking with moms and dads and kids, themselves, about what to expect."

He says there is no cure for Tourette, but there are systematic treatments and medication for the condition. Some people don't need medication; others take medication according to the severity of their condition."

Eleven-year-old William Coulter, who has a mild case, is already an expert at explaining what it is like to live with this condition.

"I get up in front of my class every year and share what I know. This prepared me for doing the documentary," he says. "I don't mind talking about or answering questions about Tourette syndrome."

And the reason is clear in his mind: "Some people are really shy. It would be better if people knew about Tourette's. People who are shy and have Tourette's wouldn't have to know how to explain to everyone."

His mom, Kelly, says it is sometimes hard for teachers to understand.

"It's not something that we get in our training to be a teacher," she says. "We don't learn about Tourette's syndrome. I think a lot of times when people have tics, motor or vocal tics, they see it as a behavioral issue instead of for what it is. Just because they're misinformed."

Kelly Coulter says she didn't know her husband had the condition until William began to show signs of it. She then learned her husband had found a way to successfully control his tics.

The condition is hereditary.