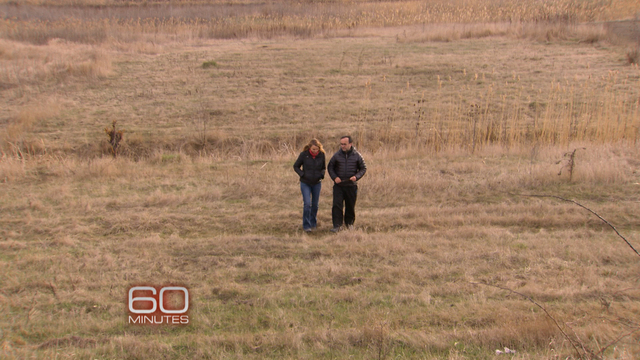 They lie in unmarked mass graves throughout the former Soviet Union, forgotten victims of the Holocaust whose stories haven't been told. Father Patrick Desbois is determined to find them for history and for humanity. The French Catholic priest takes Lara Logan to some of the sites his work has discovered for a 60 Minutes story to be broadcast Sunday, October 4 at 7 p.m. ET/PT.

The victims are mostly Jews who were living in Eastern European towns when the Nazi's invaded the USSR during World War II. Most were rounded up, marched outside of town, and executed in mass shootings on the edges of freshly dug ditches. Unlike the victims of the gas chambers, whose names were meticulously recorded, victims of these mass killings remain mostly unknown and hidden. "Totally invisible. Under a corn field, under house, under a tomato field," says Father Desbois. "And never be recorded and still buried like animals." Watch an excerpt.

Logan and 60 Minutes cameras went with Father Desbois to the former Soviet republic of Moldova, where in one day alone, he showed her the unmarked gravesites where witnesses have told him over 1,100 victims have been secretly buried for over 70 years. The sites are then marked by GPS so history will have a record of where these forgotten dead lie. He can't do any more to commemorate them. Father Desbois told Logan that discovered mass graves have been dug up and looted by locals searching for any valuables, including jewelry the victims wore the day they were murdered.

Father Desbois' Paris-based organization, "Yahad--In Unum" (which means "together as one"), identifies mass Jewish killing sites and collects forensic evidence of the executions; then they find and record video testimonies of eyewitnesses to the crimes. For over a decade, Father Desbois and Yahad have investigated over 1,700 execution sites throughout the former Soviet Union.

He and his team find the mass graves sites by tracking down elderly villagers who were children during WWII; people like 85-year-old Gheorghe who lives in Hiriseni, a rural Moldovan village that hasn't changed much since the war. "As soon as they came, they locked everyone up. I saw them taking them away. On foot, tied up. The children, too," he tells Logan. "The Jews were facing the ditch, so they were shooting them in the back of their heads or their backs to fall into the ditch... they were shooting them as if they were dogs."

Gheorghe is one of over 4,000 local, non-Jewish witnesses to these atrocities. Some were forced to help the Nazi death squads; others watched. Logan speaks to several more of them for her story Sunday night.

Father Desbois has learned about humanity on his mission -- which is supported by his local Cardinal and the Vatican -- to document these forgotten Holocaust victims. "I learned everybody can be a killer, anybody can be a victim. I learned that you like to see other people dying in front of you, killed by other people, when you are sure you will not be killed."

The work of Father Desbois and Yahad--In Unum is extremely valuable says Paul Shapiro, director of the Mandel Center for Advanced Holocaust Studies at the United States Holocaust Memorial Museum. "The method that he's used, extraordinary. We can understand minute-by-minute what happened in hundreds of localities where before we just had fog."