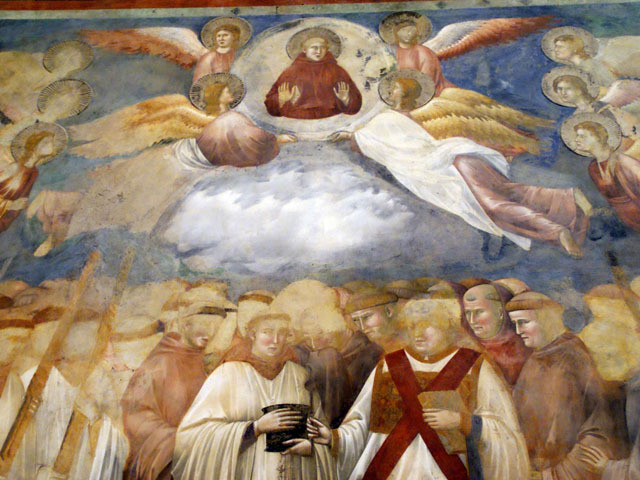 ROME - A smirking horned devil exists in the frescoed clouds of a Giotto work in the famed Assisi basilica, an Italian art historian said Tuesday — a tantalizing detail that apparently went unnoticed by scholars for centuries.

The discovery was reported in the online edition of this month's issue of the Franciscan religious order publication San Francesco Patrono d'Italia.

Art historian Chiara Frugoni said she has spent almost 30 years studying the cycle of frescoes in the upper level of the Umbrian landmark church, but only recently spotted the image in what appears to be an empty space in a cloud.

The frescoes — in Assisi, in the central Italian province of Perugia — are by Giotto, a Fiorentine, whose narrative style and human-like figurative style marked an evolution in art in the late 13th century.

In a telephone interview with The Associated Press on Tuesday, Frugoni said she chanced on the image of the devil while trying to more precisely date a fresco depicting the death of St. Francis of Assisi. She has since concluded it was painted in 1289.

"It's very visible," she said, adding that the image had not previously come to attention because no one had been looking for it.

"One sees what you already know. I assure you that now all will see it," she said.

She described the detail to the publication as a "vigorous portrait of a devil with two dark horns" cleverly hidden in the swirling clouds near an angel, and said that the significance of its placement needs to be studied.

The Rev. Enzo Fortunato, a friar with the order, said that in medieval times it was commonly believed that at death two figures go into action — an angel to accompany the just into heaven; a devil to bring the damned into the depths of hell.

Fortunato said that by hiding the devil in the clouds, Giotto appears to have beaten by nearly two centuries a technique attributed to Andrea Mantegna, who in one painting shows a knight emerging from a cloud.

A strong earthquake in 1997 heavily damaged the basilica, and restorers took years to complete the restoration on some of the Cimabue and Giotto frescoes.

What does new price cap on Russian oil mean for consumers?
Thanks for reading CBS NEWS.
Create your free account or log in
for more features.
View CBS News In
CBS News App Open
Chrome Safari Continue
Be the first to know
Get browser notifications for breaking news, live events, and exclusive reporting.