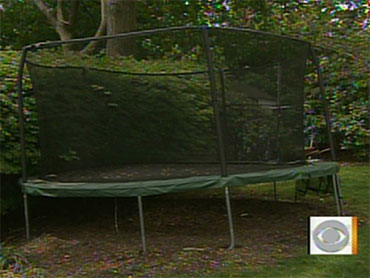 It's peak season for trampoline injuries, most of which are minor bumps and bruises. But some people have been paralyzed and even killed on these backyard entertainment devices.

"Early Show" Consumer Correspondent Susan Koeppen reported there's a right way and a wrong way to jump on a trampoline. She said you should always jump in the middle, and only one person at a time.

Trampoline injuries led to 98,000 trips to the emergency room last year alone. Children are the most frequent victims, but adults are also getting hurt, sometimes with devastating consequences.

Koeppen shared the cautionary tale of Ryne Cleary, who was just 5 years old when he got his backyard trampoline. It was one of the many outdoor activities he enjoyed with his dad, Kevin. Now all Kevin Cleary can do is watch his son play ball, all because of a wrong move on the family's trampoline.

Koeppen asked Ryne, "You blame yourself for what happened?"

Koppen offered, "Because you asked him to do a back flip?"

Kevin landed the back flip once, but on the second try, he says he came up short.

He told Koeppen, "I'm not too sure how, but I landed basically on my forehead."

Kevin suffered a severe spinal cord injury, and is now paralyzed from the shoulders down.

Kevin told Koppen he instantly knew something was wrong.

"I can to this day hear the crack."

Last year alone, an estimated 98,000 people were treated in emergency rooms for trampoline related injuries. 82 percent of them were children under the age of 15.

Trampoline safety expert Marc Rabinoff, of Metropolitan State College of Denver, Colo., calls trampolines "quad machines" because they can turn you into a quadriplegic in four seconds."

Rabinoff said what happened to Kevin is not a fluke accident, but rather a "very common" occurrence.

Warnings on trampolines say no flips, no jumpers younger than 6 and only one jumper at a time, but those warnings are often ignored. Koeppen pointed out videos from YouTube that show children jumping and falling from trampolines.

Rabinoff says people don't realize trampolines are a danger in their backyard. Rabinoff demonstrated to Koeppen how jumping with more than one person can throw you off.

The trampoline industry says sales of backyard trampolines have soared with more than one million now sold every year.

Mark Publicover is the founder and chief executive officer of JumpSport, the leading manufacturer of trampolines. He says trampolines are a "wonderful activity for kids when used properly."

He says safety nets around trampolines reduce injury up to 50 percent. But JumpSport still sells trampolines without nets.

Publicover told CBS News, "We cannot make the final choice. We live in America. It's a free country, and sometimes it's reasonable to sell a trampoline without a safety enclosure."

But safety nets won't prevent all injuries. Kevin Cleary's trampoline had a net, but he was injured for life.

Kevin told Koeppen, "You're jumping, you fall down, you're giggling and everything like that. Fall the wrong way, (and) this can happen."

Even the insurance industry is taking notice of trampolines. Insurance companies call them an "attractive nuisance" -- just like a swimming pool in the backyard.

Koeppen added on "The Early Show" that nets on trampolines are not mandatory.

"The industry right now is taking a look at its safety standards and might make nets mandatory," she said.

"And JumpSport, the company we featured in the piece, during our interview, they said, 'We're going to commit to only selling above ground backyard trampolines with nets.' But don't get a false sense of security that if you have a net, you're not going to get hurt."