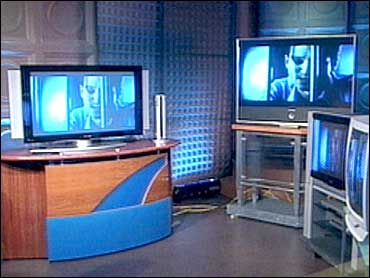 For those in the market for a new television, there's plenty to choose from. But it could add up to a lot of confusion if you're not familiar with all the latest hi-tech options.

To give a clearer picture, tech editor Brett Larson reviews the latest in televisions on The Early Show.

CRT (Cathode Ray Tube)
This familiar form of television has been around from the beginning. Its glass display is where the term "tube" comes from, but its days are numbered because of better, lighter technology. The benefits of the CRT are price and performance. Being the oldest technology gives this device a lower price, and its seniority in the line up makes it the better performer -- providing a sharper picture for the money. On the downside, its size can adversely affect its weight, getting up into the hundreds of pounds for even the most reasonable 23-inch sets.

The newer flat CRT displays don't provide a sharper picture, but instead cut back on glare (giving the illusion of a sharper picture). If a CRT is in your future, Larson says to consider the better looking flat displays.

HDTV
With high definition, the screen is wider than before, more like a movie screen, and the picture is more lifelike. Larson says HDTV is the next step in television. To enjoy it, you'll need to pick up a new HD-ready set.

LCD (Liquid Crystal Display)
These flat, lightweight displays have been the companion to computers for about half a dozen years. They started a lot smaller, but through the years have increased in size and improved in sharpness and contrast. The LCD televisions tend to be more expensive than their similar sized CRT counterparts, but many of them are HD-ready and can double as a display for your computer, which is great if you're tight on space).

Tucci Rules In 'The Terminal'

Their bonus: lightweight, thin and bright.

But, Larson says to be prepared to spend some extra cash. The devices can cost from a few hundred to a few thousand dollars. And, expect to pay more for HD-capable displays.

What should you look for when buying an LCD?

Larson says to take a look at fast moving action, and dark scenes. LCD's tend to experience "ghosting" when the movement is quick, and the better the display can display black the better your video will look.

Plasma Displays
Newest to the line up, these wall-sized displays can be hung like artwork. Plasma displays tend to start big, in the 42-inch range, and go upwards to 80-inch. Over the past few years, plasma displays' prices have dropped significantly, now near or below $5000. But, some early adopters have complained of a problem called "burn in," where images can be permanently left on the screen. Also, the light that keeps the display bright can become dim or completely fail earlier than expected -- a few things to keep in mind before buying, says Larson.

According to Larson, you should first strongly consider getting an HD-ready model if you're thinking about purchasing a plasma display. You don't want to spend a lot now and have to replace it in a few years. Also, get it professionally installed should you be hanging it on the wall, and double check the expected life of the backlight.

Rear Projection
Remember those giant televisions from the '80s that had a red, green and blue projector sticking out of the front? Well, they're back, and now the projectors are tucked neatly inside a television set. Using new technology such as DLP (Digital Light Processing), these displays are bright and have great contrast.

They're also lightweight compared to same sized CRT displays and many are HD-ready. Larson says when considering a rear projection, make sure it has good contrast, check that you can see it without looking directly at it (from side to side) and see how it looks with the lights on. Many rear projection sets tend to look dim or dull in brightly lit rooms.