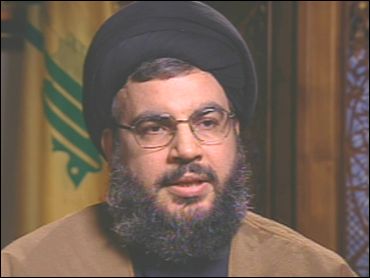 This is what deputy secretary of state Richard Armitage had in mind a few months ago when he pinned this label on Hezbollah.

"Hezbollah may be the 'A-Team of Terrorists' and maybe al-Qaeda is actually the 'B' team. And they're on the list and their time will come," says Armitage. "There is no question about it - it's all in good time. And we're going to go after these problems just like a high school wrestler goes after a match. We're going to take them down one at a time."

What he's talking about started about two decades ago as a ragtag militia group fighting the Israeli occupation of southern Lebanon. But there's no longer anything ragtag about Hezbollah now, Correspondent Ed Bradley reports.

The Islamic government of Iran reportedly subsidizes Hezbollah to the tune of $100 million a year, providing its several thousand well-trained fighters with sophisticated weapons systems. Iran also sends advisors, and according to U.S. intelligence, issues its marching orders.

Sen. Bob Graham, the Florida democrat who chaired the Senate Intelligence Committee in the last Congress, and is now running for president, says the Bush Administration should be more concerned with Hezbollah than they are with Saddam Hussein.

Graham says Hezbollah has a global network of radical Islamic supporters, with enough operatives in the U.S. to pose a terrorist threat here.

"It has a significant presence of its trained operatives inside the United States waiting for the call to action," says Graham.

"Well, I'm more concerned and more afraid than if I did not know what the scale of their presence was in the United States," says Graham, without any hesitation.

"They are a violent terrorist group. And they have demonstrated throughout their now 25-year history a hatred of the United States and a willingness to kill our people."

Senator Graham is referring to the 1983 truck bombing of the Marine barracks in Lebanon, which resulted in the death of 241 U.S. Marines. Hezbollah's supporters say that attack was a response to shelling by U.S. warships of Islamic factions in the Lebanese civil war. The U.S. called it terrorism.

But Hezbollah's leader, Sheikh Hasan Nasrallah, who we met in Beirut, insists that his group no longer poses a threat to the U.S. Unlike the leadership of al-Qaeda, he isn't hiding from anyone. You may never have heard of Nasrallah before, but he is a hugely popular figure, not just in the region but also among Arabs living in the West

" I believe the Americans are just saying what the Israelis want them to say. I consider this to be an Israeli accusation coming out of an American mouth and nothing more," says Nasrallah.

When he became its leader ten years ago, Nasrallah turned Hezbollah into a formidable fighting force. Few people know more about him than journalist Nick Blanford, who has covered Lebanon for eight years and is now writing a book about Hezbollah and Sheikh Nasrallah.

"People adore him. I mean, I talked to some Hezbollah fighters that speak of him almost as they would a wife or a mother," says Blanford. "They think of him before they go to sleep at night, that he's always in their thoughts, so he has this tremendous power over the rank and file."

The militant Islamic group has enough power and trained skilled commandos who are specialized in attacking Israeli forces that have occupied southern Lebanon for 22 years. Their most effective weapon: remote-controlled roadside bombs that were detonated when Israeli patrols passed by -- as in the 1983 attack in southern Lebanon.

All told, Israel lost more than 900 soldiers in Lebanon. In May 2000, the Israeli Army withdrew.

What did Israel's withdrawal do for Hezbollah in the eyes of the Arab world?

"Well, there's enormous boost for Hezbollah," says Blanford. "I mean, this was a small Arab organization that had defeated the mightiest military force the Middle East has ever seen."

With the Israelis out of Lebanon, Nasrallah encouraged, and assisted, the Palestinian uprising against Israel. He has acknowledged sending secret agents carrying weapons to the West Bank, where he is considered a hero. Some kids in the Gaza Strip even dress like him, down to the beard and the glasses. At one event, a boy playing Nasrallah was flanked by one child who played a security guard, and another child dressed as a suicide bomber.

In Lebanon, where Hezbollah runs a network of schools and hospitals and participates in local elections, Nasrallah, a Muslim, is a hero even to the country's Christian President, Emile Lahoud.

"For us Lebanese, and I can tell you a majority of Lebanese, Hezbollah is a national resistance movement," says Lahoud. "If it wasn't for them, we couldn't have liberated our land. And because of that, we have big esteem for the Hezbollah movement."

President Lahoud has such high esteem for Hezbollah, he's ceded control of the border with Israel to them -- a border where Hezbollah and Israeli soldiers now confront each other just a few yards apart.

This side is controlled by Hezbollah. The other side is controlled by Israel. Hezbollah has already fired rockets across the border, and U.S. officials believe that in the past two years they've been stockpiling rockets in this area hidden in caves and underground bunkers -- higher quality Iranian rockets that could reach Haifa about fifty miles away.

Openly calling for terrorism against Israel, Nasrallah is also urging on suicide operations.

"In Palestine, these operations are the only way to root out the Zionists," says Nasrallah during a speech.

That's the kind of material Hezbollah broadcasts daily on its own television station, Al Manar, which reaches a worldwide audience by satellite. Because of Washington's support for Israel, Hezbollah is conducting a ferocious propaganda offensive against the United States.

This propaganda message broadcast on Al Manar portrays U.S. foreign policy as Satanic and shows an image of the Statue of Liberty, a skull for her face, wearing a gown dripping with the blood of other nations.

But even though he's one of the most powerful anti-American voices in the Middle East, Nasrallah says he has no use for Saddam Hussein. In fact, he blames the U.S. for Saddam's rise.

"The U.S. provided political and military support to the Iraqi regime for decades. They created this mess. I don't believe Saddam alone should be held accountable. We should also go after those who supported him -- like the American government."

Nasrallah has described the war on Saddam as a Satanic American-Zionist plan to dominate the Arab world. But what is Satanic about removing Saddam from power?

"The United States isn't seeking democracy in Iraq. It's after the oil in Iraq," says Nasrallah. "And that isn't exactly a humanitarian pursuit. The U.S. wants to impose its political will on Iraq and wants to impose Israel's domination in the region. Certainly these objectives are not moral objectives in my opinion. In fact, we say they are satanic objectives."

And yet, Nasrallah has spoken out against terrorist attacks on the U.S., including the 9/11attack.

"We reject those methods, and believe they contradict Islam and the teachings of the Quran, which do not permit this barbarity," says Nasrallah.

But Senator Graham doesn't buy it.

"There are a number of lessons we should learn from Sept. 11th. One of those lessons is that these terrorist groups tend to do what they say they're going to do," says Graham. "If they define the United States as being Satanic - and that therefore they want to kill us - they will find ways to carry out that objective."

Is he convinced that they possess weapons of mass destruction?

"I'm not certain whether they possess them," adds Graham. "But I am confident that they could possess them through their close affiliation with Iran, which has a larger warehouse of chemical and biological weapons, and is closer to gaining nuclear weapons capability than Iraq."

So if Iran wants them to have weapons of mass destruction, will they have it? Graham believes they will, and in large quantities, too.

Iran isn't the only country that supports Hezbollah. Syria allows Hezbollah to train fighters in remote camps in Syria and territory under its control in Lebanon.

"In recent years they have been infiltrating into this core in the United States people who have gone through their training camps and have the skills of terrorist activity," says Graham.

According to the FBI, Hezbollah has never conducted a terrorist attack in the United States. The FBI says that its members here are raising money for activities overseas and nothing more than that.

But there has to be a first for every organization. The first for al-Qaeda was Sept.11, 2001. When will the first attack against an American in America by Hezbollah take place?

We asked Lebanon's President Lahoud, a political ally of Hezbollah, if Americans have anything to fear from them.

"Americans? For sure not," says Lahoud.

"Well, believe me, they don't have anything to attack the U.S. or any U.S. citizen for sure," assures Nasrallah. "But Israel is our enemy. That's something else. It has nothing else to do with the U.S."

But that's not what he said last month just days before the war began.

"American policies in the region encourage this kind of retaliation, whether we agree with it or not. I am expressing the reality," says Nasrallah.

"I believe the continuation of American policy will make enemies of all Arabs and Muslims - meaning hundreds of millions of Arabs and one billion four hundred million Muslims around the world. Lots of groups will surface, not necessarily al-Qaeda, and they'll be impossible to bring to justice."