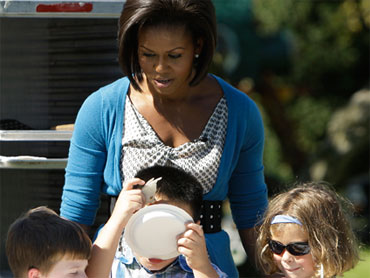 Paul Campos is a professor of law at the University of Colorado. He is the author of The Obesity Myth.


The Obamas are worried about their daughters getting fat. In November 2008, Barack got a promotion and mentioned to the media that, a couple years earlier, he was concerned that Malia had become "a little chubby." A later visit to a pediatrician convinced Michelle that both Malia and her  sister Sasha needed to slim down.

She banned the girls from watching television on weekdays, put them on low-fat milk, replaced sugary drinks with water, largely eliminated hamburgers from their diet, and monitored portion sizes at meals carefully. The next time she took them to the doctor, she reports, he was amazed. "What on Earth are you doing?" he asked.

It's a good question.

What Michelle Obama is doing this week is launching the next big government "war" on a supposed social crisis. On Tuesday, President Obama signed an executive order directing government agencies to work with private industry to combat "childhood obesity." The First Lady took to the airwaves, issuing dire warnings that one third of America's children are dangerously fat, while launching a website which makes the alarming claim that, "for the first time in our history, American children may face a shorter expected lifespan than their parents." The goal of the campaign, Mrs. Obama emphasized, is to "eliminate this problem of childhood obesity in a generation."

All this is dangerous nonsense. Let's start with the Obamas' goal of trying to produce an America with no fat kids. Consider what we even determine to be "fat." In recent years, government panels decided to define "overweight" and "obesity" as the 85th and 95th percentiles of body mass on the height-weight growth charts for children. According to someone heavily involved in the process, they did this quite arbitrarily, without any evidentiary justification, other than a vague sense that increasing weight among children was a problem that required some definitional markers.

Now, the statistically curious might wonder how, given this definition, it's possible for one-third of America's children to be too fat. The answer is that federal public health agencies have decided to use data from the 1960s and 1970s to define the 85th and 95th percentiles. In other words, when Michelle Obama claims a third of our children are too fat, what she's really saying is that what was the 85th percentile on the height-weight charts 40 years ago  is about the 67th percentile today.

Is this a problem? Some might note that, by every objective measure, including life expectancy, and rates of chronic disease and disability, American children, like American adults, are both bigger and healthier now than they were a generation ago. (Despite claims to the contrary, Type II diabetes among children remains quite rare.) Obesity panic-mongers reply that, although the health of our children is admittedly better than ever, this trend is going to be reversed by a growing epidemic of fatness (hence claims about a generation of children that will not live as long as their parents).

In fact, a new comprehensive meta-analysis of data from more than a dozen countries, including the U.S., reveals that, for a decade now, obesity rates all over the world among both adults and children have been largely flat or actually declining. The study points out that alarmist claims from public health officials about an "obesity epidemic" are all explicitly based on the mistaken assumption that obesity rates are continuing to rise.

In particular, the claim that life expectancy in America is going to decline is unsupported by any demographic or epidemiological evidence. (This widely repeated claim can be traced to some data-free musings in a New England Journal of Medicine article five years ago, from which the authors subsequently backed away.)

The choice of weaponry in this unnecessary war is also unfortunate. The Obamas want to improve the nutritional value of school meals, help children become more active by making urban areas amenable to physical activity, improve labeling on food products, and decrease the number of "food deserts"-areas where it's difficult and expensive for people to buy fresh fruits and vegetables.

These are all laudable goals in and of themselves, but it's a terrible mistake to pursue them  in the name of getting rid of fat kids. First, numerous studies indicate that, just as with adults, improving children's nutrition and activity levels is beneficial to their health, but usually produces little or no weight loss (which is all the more reason to focus on health rather than weight). Nor are thin children in any less need of good food and healthy activities than fat ones. Indeed, over the past 20 years, extensive research has demonstrated that, when studies control for factors such as physical activity levels, weight simply ceases to have any meaningful correlation with health.

Second, a rich literature on stigmatization shows that the health costs of social stigma are high. I don't believe Michelle Obama wants to stigmatize fat kids, but a campaign dedicated to eliminating them is guaranteed to do so in a profound way.

On that same theme, one wonders if the First Lady has considered that putting her pre-teen daughters on diets is far more likely to make them eating disordered rather than permanently thin. (If the kind of obsessive monitoring of food and activity choices Obama recommends to parents actually "worked," there would be almost no fat kids in America today, at least in the middle and upper class families where Obama's anxieties about her daughters' weight are all too common). And does she really think it's a good idea for her husband to make negative comments about his daughter's body to the nation's media?

Everyone should support reasonable attempts to make it easier for all children to enjoy a healthy balance of foods and the pleasures and benefits of physical activity. Trying to do so by stigmatizing the bodies of one out of every three American kids is a horrible idea.

By Paul Campos:
Reprinted with permission from The New Republic.