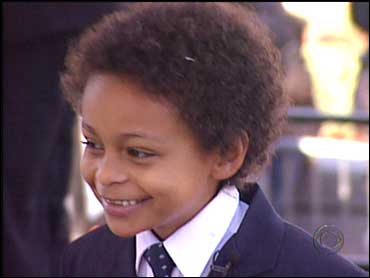 Before this week's Martin Luther King rally in Atlanta, they did a sound check, which went off … without a sound.

David was scheduled to sing the national anthem.

"Go ahead, sing it for me…" the state manager pleaded.

Unfortunately, David wasn't in a very star-spangled mood, CBS News correspondent Steve Hartman reports. Which begs the question: How'd he even get this gig?

"Oh, he can sing!" said Joyce Ketchie-Cann, the director of Harmony, one of the most prestigious childrens choirs in Atlanta. She's seen David withdrawn. But she has also seen what he's capable of - when he puts his autism aside.

"He closes in, and then he comes back out, and what he comes out with is like a butterfly out of a cocoon," she said.

David has a form of autism called Aspergers. At first, his mother says he seemed perfectly normal - even said a few words - until about age 2.

"He became non-verbal," David's mother said. "And then the humming started."

The humming - for two years, constant humming - was followed by notes, and lines, and eventually entire songs.

And although his mind still locks up with autism, "For me, its like being stuck in certain phases."

David is convinced he knows the key.

"How do you get unstuck?" Hartman asked him.

His specialty is the national anthem, which he has already sung twice at NBA games.

Hartman said to David: "Some people find it very hard to sing."

Although he still does have his own hurdles. His autistic "phases" as he calls them. Turns out, sometimes it takes more than a song to unstick him. Sometimes, it takes an audience too.

In the end, David gave another flawless tribute to the flag. And in doing so, he unfurled just a little more of the mystery of autism.