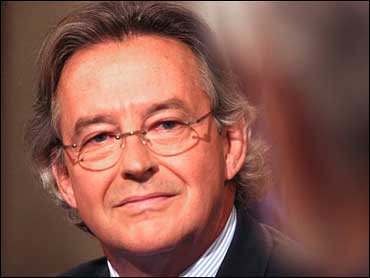 Tom Hamburger and Peter Wallsten of the Los Angeles Times reported on July 18 that top White House aides were in a state of mania around this time two years ago, "intensely focused on discrediting" Joseph Wilson after he wrote his now-famous New York Times op-ed piece.

Hamburger's and Wallsten's sources tell them that Karl Rove's animus toward Wilson was so intense that curiosity arose within the White House about it. When asked about this, Rove reportedly said, "He's a Democrat."

I do not understand why some things get this town upset while others don't, but those three words should make any honorable patriot of either party both furious and ashamed. Wilson spent two decades in his country's service -- in diplomatic postings in Africa, chiefly, but also at the National Security Council, and in Baghdad leading up to and during the Gulf War of 1991. Former Secretary of State James Baker once thanked him for his "outstanding service to the nation," and the current president's father was equally effusive in a late-1990 telegram to Wilson in Baghdad.

But to Rove, that service and those testimonials meant nothing. Rove had someone run Wilson's Federal Election Commission sheet and noticed, according to the Los Angeles Times story cited above, that Wilson's campaign donations "leaned toward Democrats." That was true. And that was enough: Nail him. Even though -- get this -- Wilson had donated $1,000 to the Bush campaign in 1999!

And all this, of course, is putting aside Valerie Plame's service to the nation -- another two decades of work, dangerous work, on behalf of administrations Republican and Democratic. And finally, don't forget, there's the question -- little discussed so far, but one on which I trust prosecutor Patrick Fitzgerald is gathering information -- of whether any of our human assets overseas whom Plame had cultivated in her years of work were harmed after Robert Novak's column was published.

For years now the right has practiced a partisanship more intense than that practiced by either party in the last 100 years. There's no need to describe it in detail here; everyone reading this knows its basic contours. But this scandal raises the question anew: Exactly what does someone in the Bush administration need to do before some Republican stands up and says enough?

Because so far, I can't think of a single Republican official or conservative commentator who has even acknowledged that Rove's conversation with Matt Cooper may have been the least bit problematic. No GOP elected official has breathed a word of doubt. Over at The Corner, they're turning somersaults trying to prove that Cooper's language may have meant this and not that, or running interviews with Robert Luskin that actually introduce no information that bears on the facts of the case, which other Cornerites then bray "proves" Rove's innocence.

At The Weekly Standard -- which in 2001 boasted, as my colleague Sam Rosenfeld reminds us over on Tapped, of the "Responsibility President" -- it's the same duck-and-cover routine, led by a lengthy Scrapbook item trying to debunk Wilson's credibility. They never acknowledge the remotest possibility that Rove might have done something untoward.

And, of course, they never will, which is the Watergate-paradigm idea. The conventional wisdom is that Richard Nixon might never have fallen if his own party hadn't given up on him, if Barry Goldwater and some other GOP leaders hadn't gone to him and advised him to throw in the towel. So if they just hold the line now, and make it seem like Wilson is a liar and the evil liberals will stoop to anything to nail poor Rove, their man will survive.

Maybe he will. Fitzgerald may have something to say about that, and I think we can see that he doesn't care what anybody thinks. In the absence of political integrity such as that displayed by Goldwater in 1974, there is such a thing as evidence, and evidence, even in this irrational town, is sometimes enough.

But in the meantime, it's a pathetic thing to watch supposedly respectable conservative intellectuals act like they're running for the editorship of Pravda in 1921. And when an agent who's presumably risked her life for this country has been exposed. I thought that was the kind of thing these people cared about. But not, I guess, when her husband is "a Democrat."