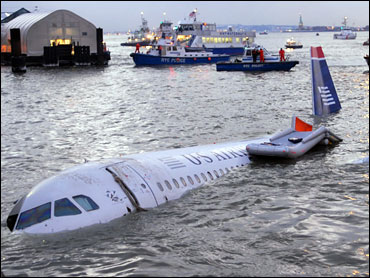 Just before he ditched into New York's Hudson River last month, the pilot of US Airways Flight 1549 calmly radioed to air traffic controllers,

"We're gonna be in the Hudson."

The audio recordings, released Thursday by the Federal Aviation Administration, reflect the initial tension between tower controllers and the cockpit and then confusion about whether the passenger jet went into the river.

According to the tapes, Capt. Chesley "Sully" Sullenberger, who sounded calm and matter-of-fact during the episode, also considered Teterboro Airport in New Jersey, just across the river from New York, but told controllers "we can't do it."

Sullenberger's voice never wavered, reports CBS News correspondent Bob Orr. But his badly crippled plane and the 155 people on board were running out of good options.

"It was the worst sickening pit-of-your-stomach, falling-through-the-floor feeling I've ever felt in my life," Sullenberger told CBS Evening News anchor Katie Couric in an exclusive interview. "I knew immediately it was very bad."

"Emergency inbound," one tower controller says as he tries to arrange for the stricken plane to land at Teterboro.

"Can I get him in for Runway One?" the controller at New York TRACON, the Terminal Radar Approach Control Center in Westbury, N.Y, asks the tower at Teterboro.

"Runway One, that's good," says the tower controller at Teterboro.

"Cactus 1529 turn right two-eight-zero" for Teterboro, the TRACON controller orders the plane's pilot. Cactus is the call sign used by controllers for US Airways; the FAA says the controller, in the intense situation, got the flight number wrong.

"We can't do it," replies the plane's pilot.

"Which runway would you like at Teterboro?" asks the tower at LaGuardia.

"We're going to be in the Hudson," the pilot replies.

"I'm sorry, say again Cactus" an air traffic controller responded after hearing the pilot's message that he was ditching the Airbus A320.

There was no response from the aircraft.

After contact with the plane is lost, the tension in the tower at LaGuardia is clearly reflected in the voice of a controller. He sighs and then whispers to himself, "All right" as he returns to his normal duties.

"He lost all thrust" and "they're gone, all frequencies," the controller tells another plane that is preparing to take off.

Sullenberger has told FAA investigators he glided the plane into the river rather than risking a catastrophic crash in a densely populated area. All 155 aboard survived.

The trouble began moments after Flight 1549 took off on Jan. 15.

"Hit birds, we lost thrust in both engines, we're turning back to LaGuardia," the aircraft reported.

Controllers handling the departure told the LaGuardia tower: "Tower, stop your departures, we got an emergency returning." After identifying the flight, they said, "He lost all engines, he lost the thrust in the engines, he is returning immediately."

But less than 20 seconds later, Flight 1549 reported: "We're unable. We may end up in the Hudson." That led to the unsuccessful scramble to divert the plane to Teterboro.

The National Transportation Safety Board said Wednesday they've confirmed there were birds in both the airliner's engines. Remains from both engines have also been sent to the Smithsonian Institution in Washington to have the particular bird species identified.

The safety board also said that an engine surge experienced by aircraft during a flight two days before the accident was due to faulty temperature sensor. The sensor was replaced, and the engine was examined and found to be undamaged before being returned to service.

The flight data recorder revealed no anomalies or malfunctions in either engine until Sullenberger reported striking birds, the board said.

Engine maintenance records also show the engines had been serviced in compliance with the FAA's most recent safety directive, the board said.

Last week, the aircraft was moved from the barge where it had been docked in Jersey City, N.J., to a secure salvage yard in Kearny, N.J, where it will remain throughout the estimated 12 to 18 months the NTSB investigation could take.