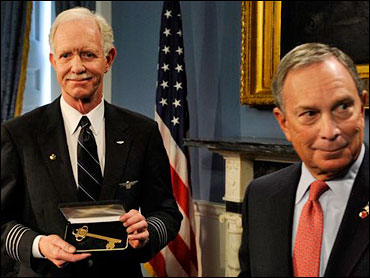 Mayor Michael Bloomberg presented keys to the city to US Airways Capt. Chesley "Sully" Sullenberger and his crew, thanking them for preventing "an awful tragedy."

"It is now my great pleasure to introduce five real American heroes," Bloomberg said at the City Hall ceremony. "I certainly hope that you feel at home here. And you should. New York City ... is a city full of heroes."

Sullenberger ditched Flight 1549 in the frigid waters of the Hudson River on Jan. 15 after a flock of birds disabled both of the plane's engines just minutes after the plane took off from LaGuardia Airport. All 155 people aboard survived.

The presentation came after a weekend media blitz for the hero pilot, co-pilot and three flight attendants. An interview with the five was broadcast Sunday on 60 Minutes, and the crew appeared Monday on ABC's "Good Morning America" and CBS' The Early Show.

Sullenberger and his family also were the toast of Broadway on Saturday night when they received a standing ovation from the audience at "South Pacific."

During the event with the mayor, Sullenberger emphasized that while he's gotten a lot of the credit for the emergency landing, it was a team effort, and he praised the crew, passengers and first responders.

Bloomberg, presenting the honors on behalf of "8.3 million grateful New Yorkers," said the city felt "a strong connection" to the story - dubbed the miracle on the Hudson. He said in saving every passenger, the five crew members lived "an ideal that ... we all aspire to."

Said the mayor: "Thank you for sparing our city and so many families from an awful tragedy."

In an interview broadcast Sunday night with Katie Couric, the pilot described lying awake at nights second-guessing his performance - even though his skillful flying saved the lives of everyone on board.

The crew also described the tense final moments - from the time the engines went out until every passenger was back on land.