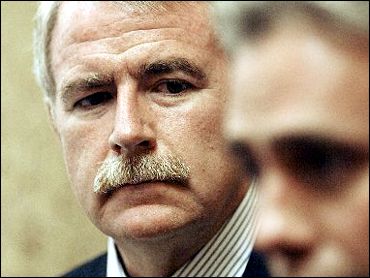 MILWAUKEE (AP) Milwaukee Mayor Tom Barrett remained hospitalized Sunday after a man attacked him with a metal pipe as the mayor tried to assist a grandmother screaming for help near the Wisconsin State Fair.

Barrett, 55, was in stable condition at a local hospital with a fractured hand and other head and hand wounds, official said.

The mayor had gone to the fair outside Milwaukee on Saturday night with his sister, two daughters and a niece. As the group left and walked to Barrett's car, they heard a woman screaming for someone to call 911, police said.

Police said the woman was a grandmother who was trying to protect her 1-year-old granddaughter from a 20-year-old man, an assault authorities characterized as a domestic dispute.

"The mayor stopped and said something (to the man) like, 'Let's all cool down here, I'm going to call 911,"' the mayor's spokesman Patrick Curley said. "He said it one or two times according to him. When he took out his phone, that's when the suspect attacked him."

The suspect hit Barrett in the head and torso with a metal pipe. Barrett apparently fought back, fracturing his hand when he punched the suspect.

"I think he hit the guy," Curley said. "I don't know where, but it was hard enough, whatever he hit, to fracture his hand."

The suspect then fled the area when he heard sirens. He was arrested on Sunday at a Milwaukee home, and police recovered the alleged weapon. The woman and baby were uninjured.

The mayor, who did not ask for security to accompany him to the fair because he wasn't on official duty, underwent successful surgery Sunday on his fractured right hand and also had cuts on his head and lip stitched up, Curley said. The mayor likely will remain in the hospital through Monday, he said.

The mayor's brother, John Barrett, said the family was optimistic about the mayor's recovery.

"We're extremely proud of Tom's selflessness and his courage," John Barrett said, fighting back tears at a news conference.

Gov. Jim Doyle said he also visited Barrett at the hospital Sunday morning and found him in "good spirits and looking good considering what happened."

"The mayor's heroic actions clearly saved a woman and others from harm," Doyle said in a statement.

Milwaukee Police Chief Edward Flynn said authorities had no reason to believe the suspect knew it was the mayor he was attacking. Police said the suspect was intoxicated at the time, had wanted to see his daughter and had threatened to shoot himself and others.

Under the city's line of succession, Common Council President Willie Hines would take command if the mayor were incapacitated. Curley said he briefed Hines but didn't expect a transfer of power would be necessary because Barrett "is engaged, he's conversational."

Barrett was already planning to take this week off for a family vacation, Curley said.

The mayor's only regret about the incident is that his family was there to witness what happened, Curley said.

"He said it was hard because his kids and niece were there at the time of the incident," Curley said. "He knew he had to (intervene). It was the right thing to do."

Barrett was elected Milwaukee mayor in 2004 and re-elected last year with nearly 80 percent of the vote. He also served in the U.S. House of Representatives from 1992 to 2002. His name also has begun circulating as a possible Democratic candidate for governor in 2010 after Doyle scheduled a news conference for Monday, reportedly to announce he will not seek a third term.