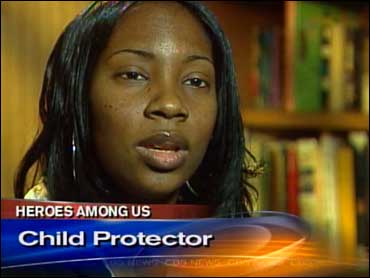 Sam Coy idolizes her late father — and is following in his footsteps by, as she puts it, placing a cause ahead of herself. Lots of people considered him a hero, and many think the same of her.

Coy, who fought her way out of Boston's projects to finish law school, was preparing to become a prosecutor but gave that up to become director of Sargent House, a group home for young people.

She is the last of People magazine's "Heroes Among Us" to be profiled by The Early Show. And she's surely a hero to many of the teens who live at the home.

"I'm their voice; I'm the one who's gonna speak for them, and that's what I do," Coy told CBS News.

But her hero will always be her father, Jeff, an undercover cop who broke up Boston's most notorious drug gang and inspired the movie, "In Too Deep." He ended up taking his own life.

Coy watches a June 1992 news account about her father over and over. In it, one person says, "Jeff is a hero. He saved lives."

"This is what real heroes do," she remarked to CBS News. "They put themselves last and the cause first."

Coy battled her way up and out of Boston's projects after her father's death, working a full-time job while earning a law degree and, as she sees it, picking up right where her father left off.

"I think Sam can in fact change a significant part of Boston, just as her dad did, and I think she can accomplish great, great things, and I know she will, frankly," observed Michael Coyne, a Massachusetts School of Law associate dean.

"I tell the kids oftentimes that, 'I don't have to walk a mile in your shoes to know where you've been and know where you're coming from. And I know some of the things you've been going through. I've seen it before and been through it myself.' "

Diana Rodriguez can't imagine where she and her son would be if it hadn't been for Sam and Sargent House last summer.

"To be honest with you," Rodriguez says, "I don't think I would have my son right now. He either would be in jail or dead, the way things were going"

Instead, Her son, Hector, is back home, playing football and thinking about college.

"The way I see it," Hector Jiminian says, "is, she opened a door for me to let my anger out a different way than what I used to do."

Randy, who has lived at Sargent House for almost to two years and is ready to move on, says, "I think I'm a different person than what I used to be before I came here, and I want to say 'Thank you' to this place."

Sargent House is a safe and a nurturing place where, hanging proudly beneath Coy's diplomas is — a math award for one of the house's residents.

"I believe," she says, "that the difference that we make here at the Sargent House will go on and continue on. That's the goal."

Coy is continuing to set an example by working on a master's degree in psychology in her spare time.

Sargent House is part of an organization called Community Resources for Justice."