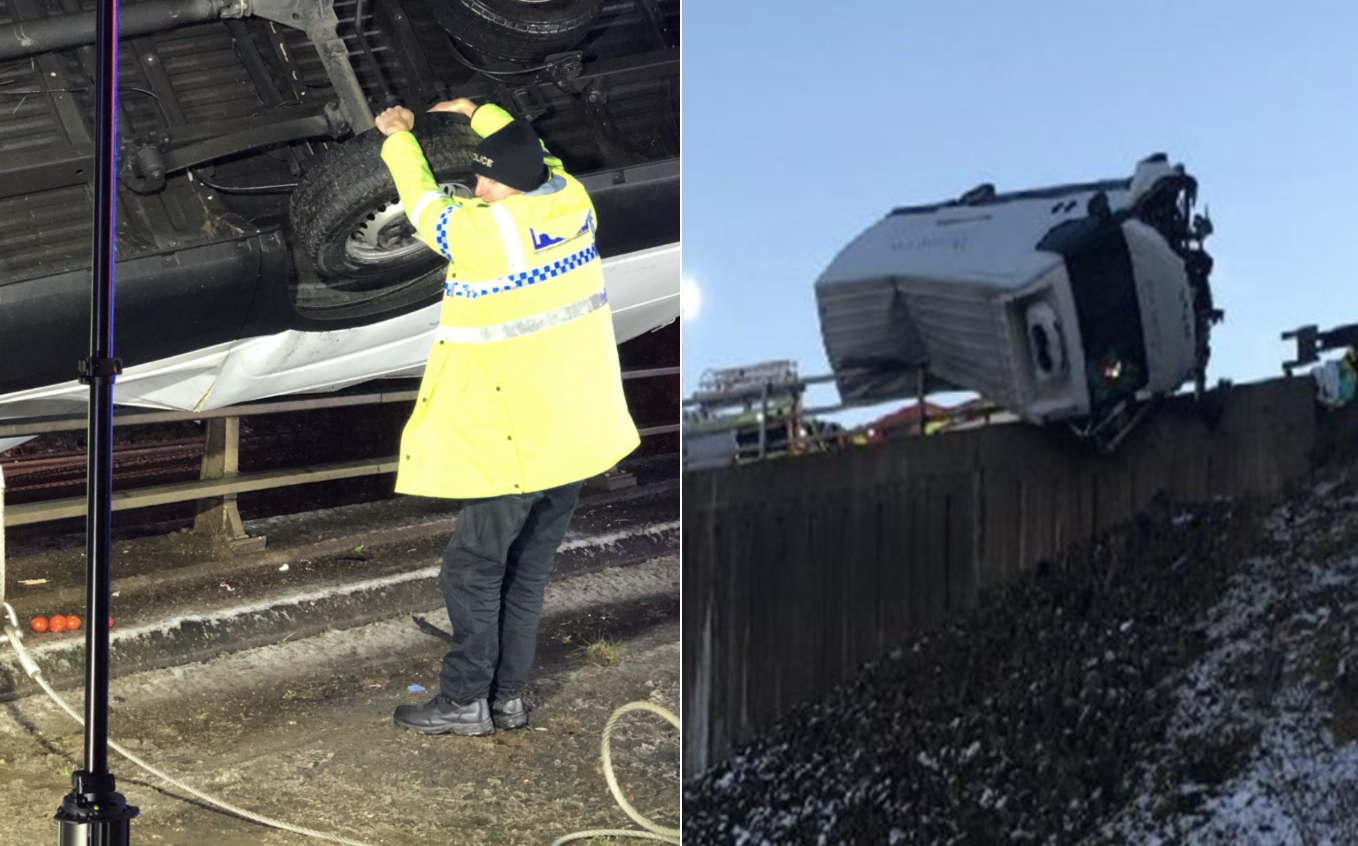 For 15 minutes, Police Constable Martin Willis clung to the side of an overturned van to prevent the vehicle from falling over the edge of an icy bridge. The traffic officer from Halifax, England, was on his way to another crash when he saw the scene.

The van was hanging "upside down on top of the bridge," Willis, an officer for West Yorkshire Police, told BBC News. "I just knew I had to stop at this one; it was a very serious collision."

He could hear the driver trapped inside shouting for help.

"[I thought] any moment now this vehicle could literally tip over," Willis said.

But the officer remained calm. He grabbed a hold of the van's rear wheel and pulled inwards to help to keep the van balanced, the West Yorkshire Police described in an statement online.

"We're going to get you out of there," he told the driver. "Whatever you do, don't move."

Willis feared if he lost his grip then the driver and others on the road beneath him could be seriously injured -- if not worse.

"The driver was incredibly brave. He kept still while suffering from severe injuries," Willis said. "[I] could see his leg was badly broken."

The driver winced in pain as he responded to Willis' calls through the wreckage.

The victim was eventually rescued by officers from West Yorkshire Fire and Rescue Service, who stabilized the van and pulled it to safety "in an operation taking over two hours," the police department said.

Willis, who refers to himself as "Motorway Martin" on Twitter, posted about it on Friday, along with photos of the dramatic scene.

"1st on the scene of this collision on the #A1M this morning and faced with a vehicle balancing over the edge of a bridge with the driver trapped!" he wrote. "After holding on to the vehicle to stop it swaying in the wind I can't begin to describe my relief when @WYFRS arrived on scene!"

Hundreds of people responded to Willis, praising him for his heroic actions.

"Your superman cape isn't in this photo though! Must have come off in the fracas!" one Twitter user replied.

"Proof that not all hero's [sic] wear capes," another chimed in.

Overwhelmed by the positive response to his story, Willis paused to thank his new followers for their kind words — but then it was back to business.

"Thank you very much to everyone that has tweeted such kind words to me about the collision on the A1M this morning," Willis wrote on Twitter. "Very much appreciated! It's not going to be as cold tonight but beware as there is still the potential for ice if skies clear. Drive carefully."

On Saturday, another Twitter user, identifying himself as a parent of the a 22-year-old injured driver, reached out to Willis to express his appreciation.

"Just like to say thanks 'motorway martin' for your intervention, the driver is our son and you'll never know how grateful my partner and I are you should be renamed motorway marvel once again thank you so much," the user wrote.

The driver was taken to Leeds General Infirmary in England, where he's still undergoing treatment.

"He's had both legs pinned and needs skin grafts. He's got a long recovery but at least he's alive," the user wrote. "You are 100% a hero. Our family are forever in your debt. God bless you and all your family."

Willis thanked the man for his kind words, but insisted he's no "hero."

"I was only doing my job and really pleased I was able to help," he said.