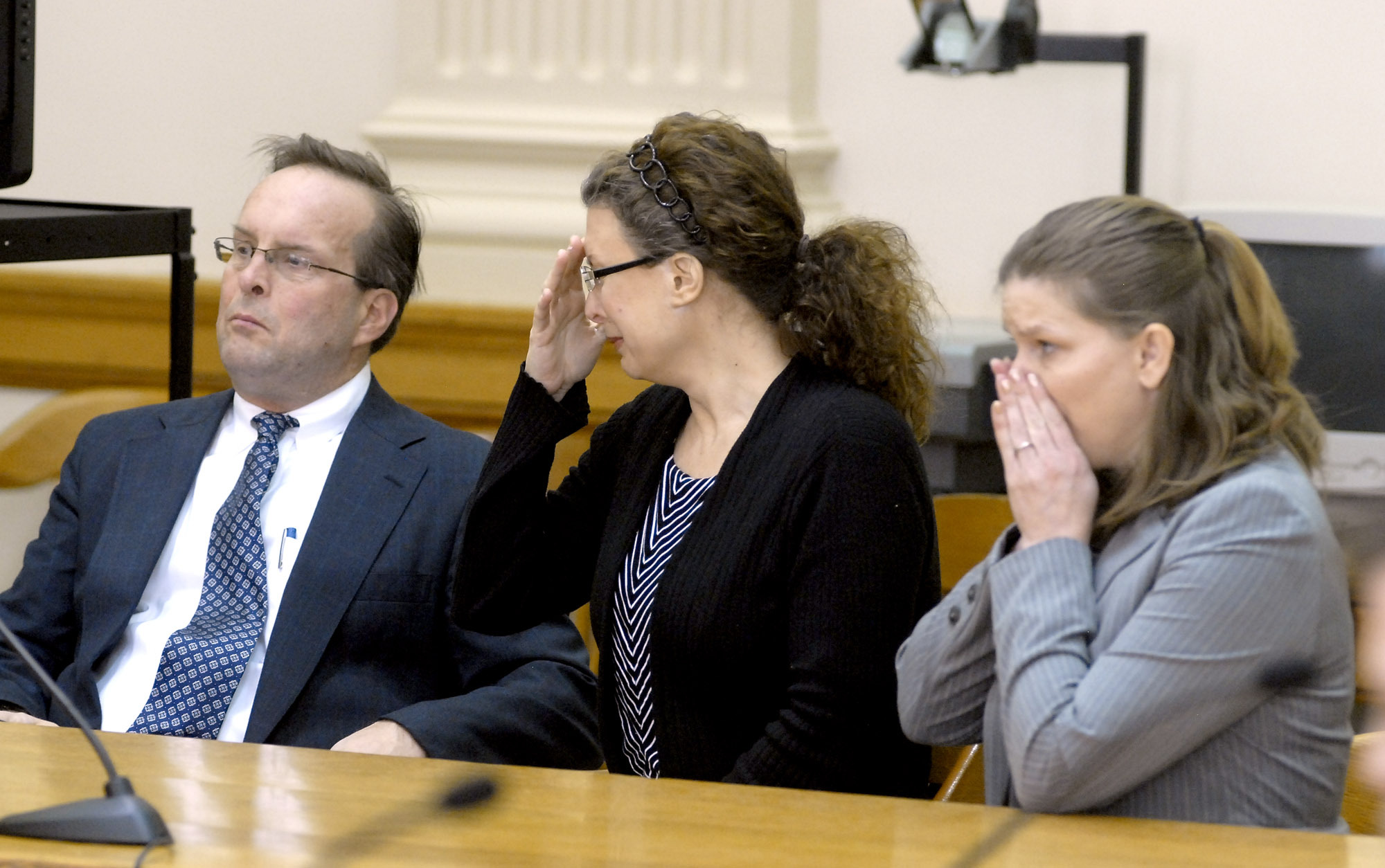 FORT DODGE, Iowa - An Iowa jury convicted a woman Monday of murder in the 2001 death of her 20-year-old neighbor, rejecting her claim that she shot him to protect herself and her three children during a home invasion.

Prosecutors maintained there was no home invasion and Tracey Richter, now 45, killed Dustin Wehde to keep him quiet about his role in a convoluted plot to frame her ex-husband. They said Richter lured Wehde to her home in Early in December 2001, had him write in a pink notebook that her ex-husband hired him to kill her and her son and then shot him nine times with two guns.

Richter was involved in a custody fight at the time, and prosecutors say she was trying to gain an advantage before an upcoming hearing to keep from losing her son and $1,000-a-month child support payments.

Richter buried her face in her arms on the table when the jury's verdict was read.

Her mother, son and fiancDe huddled in the courtroom, hugging and crying before quickly leaving without talking. Her attorney, Scott Bandstra, declined to comment as he left the courthouse in Fort Dodge.

Wehde's mother, Mona Wehde, said the verdict was "a blessing."

"I knew that was what we should get," she said. "We thank everyone ... for seeing through the lies and hearing the truth. It's what we all were waiting for."

Mona Wehde once filed a wrongful death lawsuit against Richter but dropped it when investigators said it could interfere with their case. She said despite the verdict and the decade since her son's death, there's "a lot of deep hurt left in there."

"We can move on now because everything is out in the open," she said. "We know and so does everybody else."

Prosecutors' star witness was a former family friend who testified Richter told her about the notebook a few months after the shooting and then later told her to forget about it. Investigators who found the notebook in Wehde's car testified they kept its existence secret because they believed whoever knew about its contents had committed a crime.

Richter did not take the witness stand in her own defense. But her son, Bert Pitman, now 21, gave vivid testimony about the break-in, his mother being choked with pantyhose and her shooting Wehde to protect herself and her three children. He suggested his stepfather, Michael Roberts, might have been involved in the attack, while Richter's defense argued a man Wehde's mother had an affair with might have been the second intruder.

Richter, who later moved to Omaha, Neb., where she was arrested last summer, faces life in prison at her Dec. 5 sentencing. The verdict caps what prosecutors described in court records as years of fraudulent and dangerous behavior dating back to 1991, when Richter fired shots during an argument with her first husband in Colorado.

The verdict also is a major victory for Sac County Attorney Ben Smith, who charged Richter just months after taking office. The man who Smith ousted from office last year testified for Richter's defense that mistakes in the initial investigation and other circumstantial details made it difficult to know what really happened.

"For the past five months I've been doing nothing but this," said Smith, 33, the prosecutor in a county of just 10,000 people. "This is the first jury trial I had. I didn't know what to expect."

He said the verdict hadn't sunk in yet, and he was just happy to have gotten the case before a jury. He said he didn't know what evidence was key to winning.

"It's one of those things we'll never know," he said.

Roberts, who was married to Richter at the time of the shooting, issued a statement saying he hoped the verdict would help him and new wife move on after years of feuding with Richter. Roberts, who lives in California, obtained custody of their two now-adolescent children after Richter's arrest.

"Pray for healing for my children, for the Wehde's and Tracey's other victims," Roberts said. "Pray also for a hedge of protection around Tracey in prison and that through this experience she might trust in God."