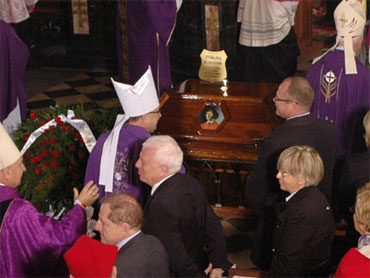 Nicolaus Copernicus, the 16th-century astronomer whose findings were condemned by the Roman Catholic Church as heretical, was reburied by Polish priests as a hero on Saturday, nearly 500 years after he was laid to rest in an unmarked grave.

His burial in a tomb in the cathedral where he once served as a church canon and doctor indicates how far the church has come in making peace with the scientist whose revolutionary theory that the Earth revolves around the Sun helped usher in the modern scientific age.

Copernicus, who lived from 1473 to 1543, died as a little-known astronomer working in what is now Poland, far from Europe's centers of learning. He had spent years laboring in his free time developing his theory, which was later condemned as heretical by the church because it removed Earth and humanity from their central position in the universe.

His revolutionary model was based on complex mathematical calculations and his naked-eye observations of the heavens because the telescope had not yet been invented.

After his death, his remains rested in an unmarked grave beneath the floor of the cathedral in Frombork, northern Poland, the exact location unknown.

On Saturday, his remains were blessed with holy water by some of Poland's highest-ranking clerics before an honor guard ceremoniously carried the coffin through the imposing red brick cathedral and lowered it back into the same spot where part of his skull and other bones were found in 2005.

A black granite tombstone now identifies him as the founder of the heliocentric theory, but also a church canon, a cleric that ranks below a priest. The tombstone is decorated with a model of the solar system, a golden sun encircled by six of the planets.

At the urging of a local bishop, scientists began searching in 2004 for the astronomer's remains and eventually turned up a skull and bones of a 70-year-old man - the age Copernicus was when he died. A reconstruction made by forensic police based on the skull showed a broken nose and other features that resemble a self-portrait of Copernicus.

In a later stage of the investigation, DNA taken from teeth and bones matched that from hairs found in one of his books, leading the scientists to conclude with great probability that they had finally found Copernicus.

In recent weeks, a wooden casket holding those remains has lain in state in the nearby city of Olsztyn, and on Friday they were toured around the region to towns linked to his life.

The pageantry comes 18 years after the Vatican rehabilitated the Italian astronomer Galileo Galilei, who was persecuted in the Inquisition for carrying the Copernican Revolution forward.

Wojciech Ziemba, the archbishop of the region surrounding Frombork, said the Catholic Church is proud that Copernicus left the region a legacy of "his hard work, devotion and above all of his scientific genius."

Saturday's Mass was led by Jozef Kowalczyk, the papal nuncio and newly named Primate of Poland, the highest church authority in this deeply Catholic country.

Poland also is the homeland of John Paul II, the late pope who said in 1992 that the church was wrong in condemning Galileo's work.

Jacek Jezierski, a local bishop who encouraged the search for Copernicus, said that he considers Copernicus' burial as part of the church's broader embrace of science as being compatible with Biblical belief.

"Today's funeral has symbolic value in that it is a gesture of reconciliation between science and faith," Jezierski said. "Science and faith can be reconciled."

Copernicus' burial in an anonymous grave in the 16th century was not linked to suspicions of heresy. When he died, his ideas were just starting to be discussed by a small group of European astronomers, astrologers and mathematicians, and the church was not yet forcefully condemning the heliocentric world view as heresy, according to Jack Repcheck, author of "Copernicus' Secret: How the Scientific Revolution Began."

The full attack on those ideas came decades later when the Vatican was waging a massive defense against Martin Luther's Reformation.

"There is no indication that Copernicus was worried about being declared a heretic and being kicked out of the church for his astronomical views," Repcheck said.

Copernicus had, however, been at odds with his superiors in the church over other matters.

He was repeatedly reprimanded for keeping a mistress, which violated his vow of celibacy, and was eventually forced to give her up. He also was suspected of harboring sympathies for Lutheranism, which was spreading like wildfire in northern Europe at the time, Repcheck said.

Copernicus' major treatise - "On the Revolutions of the Heavenly Spheres" - was published at the very end of his life, and he only received a copy of the printed book on the day he died - May 21, 1543.