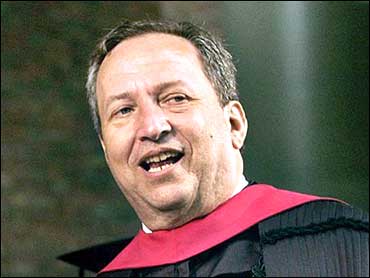 
There is such a thing as heresy in modern America. Just ask the president of Harvard, Lawrence Summers.

Webster's defines heresy as "a religious belief opposed to the orthodox doctrines of a church; esp., a belief specifically denounced by the church" or "any opinion opposed to official or established views or doctrines." As in the Middle Ages, heresy is still punished unless recantation on bent knee is proffered.

Summers violated the orthodoxy of acceptable public speech when he suggested to an academic conference, quite hypothetically, that biologically-based differences between men and women could be one of several factors contributing to an under representation of women in the higher echelons of academic math and science.

Summers was promptly and efficiently flagellated by charges of sexism and general boorishness. And so he recanted publicly. A small counter charge defended him against what they felt were the thought police, the posses of political correctness.

Many articles have documented how Summers' speculation that the role of actual physical matter in the brain could have something to do with all this is not so outlandish and indeed is pretty mainstream. No one says that Summers spoke insultingly, with overt prejudice, minimized the role discrimination plays or even implied men were smarter than women.

For the record, I believe that Summers was wronged. I find it mystifying and deeply troubling that our universities have become the very places where truly open speech and open minds are most threatened. The only institution that I regularly deal with that has an implicit code of acceptable speech that is explicitly enforced is my kids' school.

By now, every angle of this cataclysmic concept clash has been sliced and diced except, in my estimation, the most fundamental issue: the dirty little secret.

It has become unchallenged and unexamined doctrine that any suggestion that physical, genetic or biological differences between genders or races contributed to performance or ability is de facto prejudice - either racism or sexism. This pertains mostly, not entirely, to possible differences in brain function, but also to athletic performance.

When Jimmy "The Greek" Snyder suggested, albeit with a distinct lack of subtlety and Harvard cultivated panache, that evolution may have given some blacks athletes advantages over some whites, his career was sacked.

Summers' suggestion - more qualified, more sophisticated - hasn't cost him his job yet because of a quick, articulate recantation. But I wouldn't give him great odds.

Fundamentally, this is a moral argument, though I have never seen the argument clearly made by a moral philosopher or ethicist. The argument goes something like this: The assertion of differences in achievement, intellectual performance or other abilities in either gender or race is intrinsically immoral, unethical and an irrational expression of prejudice against the "less able" group - even if empirical evidence shows the relevant claims may have merit. Acceptable moral doctrine holds that all groups have identical potential of brain and, to a lesser degree, body; believing this is a necessary condition of according all groups due respect.

Is believing this a precondition of believing "that all men [and women] are created equal?" Of course not. The Declaration made the case that all people have equal rights and equal liberties and are due equal respect and justice. Believing that individuals and groups may have different, biologically-based assets and weaknesses is, in a word, irrelevant.

Everyone knows that the true third rail of current events isn't Social Security: it is crossing the "all differences between groups are caused by discrimination and social conditioning" orthodoxy. The orthodoxy is, in turn, based on the moral assertion above. But that moral claim is weak if not crippled.

There is a watered-down dogma, too: even if suggestions of biological differences themselves are not immoral in every instance, if they can potentially lead to undesirable outcomes, they may not be uttered - even if true.

Doctrine trumps truth. Thus even if there were ample empirical evidence to toss around Summers' speculations and even if he uttered them respectfully and without malice, it was immoral for him to speak publicly because it conceivably could have an undesired outcome - discouraging some women from careers in science.

There clearly are historical and cultural reasons for wariness about believing in innate differences between peoples. From the Nazis to the Ku Klux Klan and on to the Aryan nation, diseased pseudo-science has been a cudgel of hatred; racial superiority has been a clarion call of social sadism.

On a smaller but still serious scale, women and minorities have been discriminated against in the scientific academy by some who thought it was the domain of white boys. American culture is rightly vigilant against that, and fairly successful, not perfect.

But these deeper sociopathologies have nothing to do with Lawrence Summers or even Jimmy the Greek.

Here's a little thought experiment: Eighty percent of the users of medications for attention-deficit disorders are boys; 5.2 percent of all girls between 5 and 12 are held back, but 8.3 percent of boys are; women in 2001 earned a third more bachelor's degrees than men did; autism is now seen to be much more likely to afflict boys than girls.

One could reasonably conclude from this that it would very worthwhile to study hard whether physical differences in the brain could contribute to these variables.

Now did I just write a sexist, anti-boy, prejudiced sentence?

If I had substituted "girls" or "blacks" into that quick litany of factoids, my guess is I would have committed heresy and have to offer recantation to my corporate masters and my 17 devoted readers.

That is because I would have been attributing physical differences to the lagging performance of a "non-dominant" demographic group when orthodoxy demands that we believe only discrimination and social conditioning are acceptable explanations.

That is politically correct dogma masquerading as a theory of justice. Adherence often demands the suspension of common sense and the evidence of your own eyes. And that provokes a fierce, resentful but wholly understandable backlash in the non-PC world.

Prejudice, racism and sexism have no place in 21st century America. Neither does heresy.