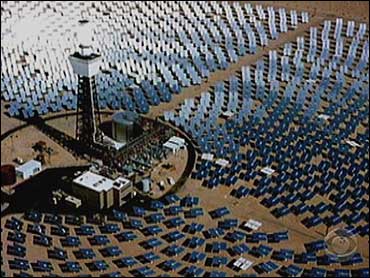 Here's a trivia question: What state has installed more solar panels than any other except California?

If you said New Jersey, your solar-energy IQ is brilliant. And if you know why several thousand huge mirrors are splayed across the Mojave Desert in California, consider yourself a solar energy genius, CBS News correspondent Tony Guida reports.

"Every single day when the Sun comes up, we are bathed with enough energy in one day to supply all the power we need for five years across the globe," Stephen Smith, executive director of the Southern Alliance for Clean Energy, said.

Lyle Rawlings has been making a living off that fact for 25 years - he's known as the godfather of solar power in New Jersey. His company's installation of solar panels on a warehouse roof will provide 90 percent of the facility's power. But technology doesn't come cheap.

But so do the oil business … and the coal business … and the nuclear industry too. The outlook for solar power, though, is brighter than any of those established technologies. General Electric estimates its solar energy division will top $1 billion in annual revenue in three years. JPMorgan Chase and Wells Fargo are investors in the biggest solar plant built in a generation.

"Solar is the one technology that is decreasing in price, increasing in opportunity and it can be the key part of the solution if we make the right investments today," says Smith.

Which brings us back to those mirrors in the Mojave Desert. No less a cutting-edge giant than Google is heavily invested in similar technology for turning sunlight into power. They're betting, just as New Jersey's godfather of solar, that this country will build a vibrant solar industry before oil and coal run out.

"For us in the solar industry, the holy grail is the point at which the cost of solar power is about equal to the cost of fossil fuel," says Rawlings.

Experts say that should happen in seven to 10 years. And by 2025, one report concludes, solar power can provide 10 percent of the nation's power needs. But that all depends on the government - the sun sets on tax credits for solar energy later this year.