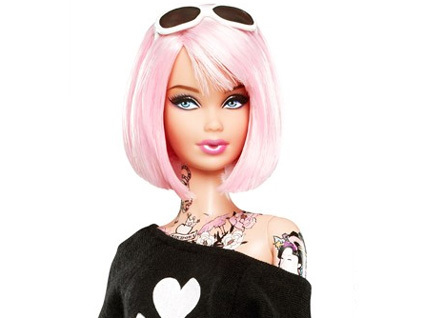 This is not your grandmother's Barbie doll.

But it's her body art that has some parents on edge.

Tokidoki Barbie's upper body is covered with exotic-looking tattoos: A large flower covers her chest, and a tiger curls up her neck.

Tokidoki, a Milan fashion house inspired by Japanese art and anime, headed by Italian artist Simone Legno, has put out the doll, as well as Barbie shirts, hoodies and accessories.

"I don't think it's appropriate for little girls to be having Barbies with tattoos all over," parent Reye Griffith told CBS Station WCBS.

Mitti Hansen, the parent of a four-year-old daughter, said, "I think it sends all the wrong signals for young girls."

Tokidoki is not the first Barbie to sport tattoos. In 2009, Mattel unveiled "Totally stylin' Barbie," but her tattoos were stick-on and removable.

"Maybe if a little girl sees that she also wants a tattoo, and I think it's not good," said parent Latifa Zyne.

But body art is a growing trend. According to the American Academy of Dermatology, one in four Americans ages 18 to 50 now has at least one tattoo.

"Tattoos right now is everywhere," said Jiminez. "It's just about art, it's nothing bad."

Tokidoki is considered a collectible and retails for $50 - much more expensive than basic Barbie dolls.

Mattel says it's marketed more toward adult collectors than to children.

Jim Silver, editor in chief of Timetoplaymag.com, told WCBS that Tokidoki is just the latest in a long line of high-fashion collector items meant for adults, not kids.

"You will not find this in any toy store," Silver said. "These are high-priced dolls, they make dolls after big time fashion designers like Bob Mackie, so these are dolls that kids generally don't see."

They may not get a chance to: According to the website tokidoki.it which is selling Tokidoki Barbie, the doll is sold out.