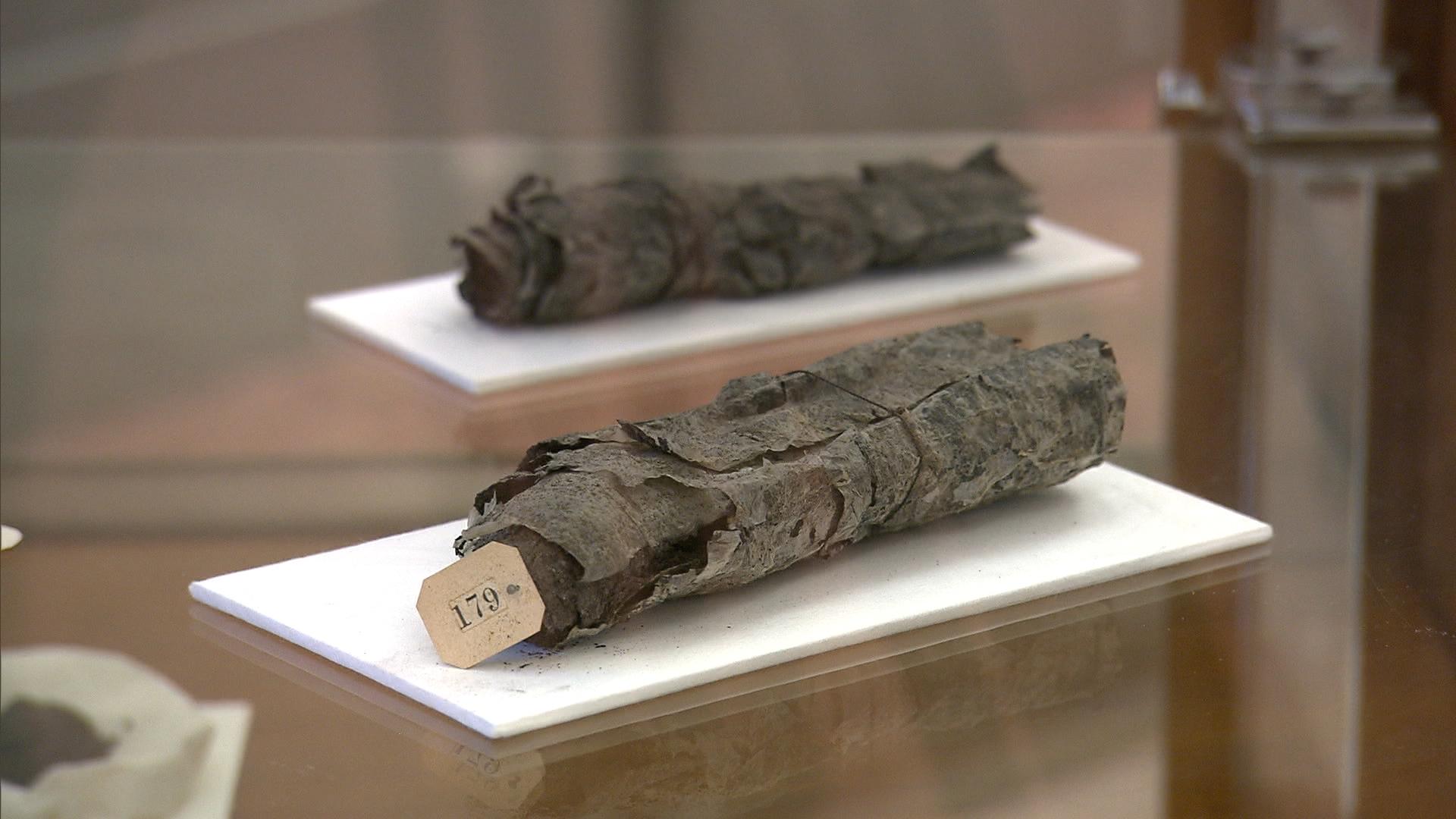 You've heard of Pompeii, the ancient Roman city destroyed when Mt. Vesuvius erupted in A.D. 79. Less well known is the neighboring city of Herculaneum, also buried by the volcano. When the city was re-discovered in the 1700s, excavators found what could be the richest repository of ancient Western wisdom: a library filled with papyrus scrolls. Scholars think there could be unknown Greek and Latin masterpieces, possibly early Christian writings, even the first references to Jesus. The problem is, the volcanic heat left the scrolls so charred and brittle, no one has been able to open them without breaking them into pieces. We heard three scholars might finally have found a way to unravel the mystery of the scrolls. So we traveled to Italy to see what we could uncover about the scrolls of Herculaneum.

The Italian city of Ercolano sits along the Bay of Naples on the western slope of Mt. Vesuvius.  The city bustles with the chaos of Italian traffic and the easy flow of Italian life. It's not a wealthy place, but beneath these narrow streets lies buried treasure, the ancient Roman seaside town of Herculaneum entombed along with Pompeii in A.D. 79. The modern city is built on top of the ancient city.

Andrew Wallace Hadrill: There's no archeological site in the world that matches this.

We went to Herculaneum with Andrew Wallace Hadrill, founding director of the Herculaneum Conservation Project. He showed us around the excavation site in all its ghostly grandeur.

Bill Whitaker: What do you think is going on here? Were they trying to escape? Were they hiding?

Andrew Wallace Hadrill: In my view, they're not trying to get away by sea, they're simply trying to take shelter under these vaults.

Vesuvius blasted the town with successive, massive surges of heat and ash for 24 hours.

Andrew Wallace Hadrill: Those surges, they kill all human life and all other forms of life. And then, wave after wave, they begin to build up these layers of ash, that compacts into rock.

Bill Whitaker: Until we have this?

Bill Whitaker: That ended up preserving this place so well?

Preserving Herculaneum like a fossil in amber – everything frozen in time, forgotten for nearly 17 centuries until, legend has it, a farmer digging a well struck the past.

Hadrill told us Herculaneum was like the Malibu of the Roman Empire – oasis for the elite. Early excavators discovered this once opulent villa. Today it looks like a cave.

In A.D. 79 it looked like this. The Getty Villa in Malibu, California is a re-creation of the summer retreat thought to belong to the family of Julius Caesar. Tunneling around in the ancient villa in Italy, early treasure hunters dug out statues and riches enough to fill a grand room in the Naples Museum. But the greatest treasures don't look valuable at all. These are the papyrus scrolls of Herculaneum, 1,800 ancient books written on sheets of plant fiber, flash seared by the volcanic heat, found in the only remaining intact library from the ancient world.

Bill Whitaker: So where was the library?

Massimo Osanna: The library was there.

The precarious villa excavation site is off limits to the public. But Massimo Osanna, former administrator of Herculaneum and Pompeii, took us deep inside.

Bill Whitaker: The library itself has not been excavated like this?

He said there could be hundreds more scrolls yet to be unearthed.

Bill Whitaker: Back in here, in the library?

Massimo Osanna: It's a possibility. Maybe Aristotle. Who knows?

Scholars have been trying desperately to open the scrolls since they were discovered.

Brent Seales: The history of the unwrapping of the Herculaneum Scrolls is littered with failures. Everyone who had tried to open the scrolls had left behind a hideous trail of fragmentary result.

Brent Seales, a brash computer scientist from the New World – the University of Kentucky to be precise – had what he thought was a brilliant idea to solve the 2,000-year-old mystery: use modern medical imaging technology.

Brent Seales: People were going to the doctor every day. And they were doing a CT scan or an MRI. And they were seeing inside their body completely non-invasively. If you can do that to a human in the doctor's office, why couldn't we see inside a scroll? That was the thinking.

Bill Whitaker: Didn't think it was that farfetched?

In the arcane world where academics spend their entire careers poring over fragments of ancient texts, Brent Seales is a superstar. He made his name digitally restoring damaged medieval manuscripts with software he'd designed. A colleague told him about the scrolls of Herculaneum, most housed at the library of Naples, a few others in France and England. He considered them the ultimate challenge.

Bill Whitaker: All locked away in that thing that looks like a little lump of charcoal.

Brent Seales: They're all locked away.

He knew imaging technology could only reveal a jumble of letters like this. To actually read the scrolls he'd have to unroll them – much like this medieval French scroll at the Morgan Library in Manhattan – but he'd have to do this virtually. After years of trial and error, he and his students thought they'd cracked the code, with algorithms and software. He was cocky enough to announce at Oxford to an international conference of scholars who study ancient papyrus – that he could do what no one else had done.

Brent Seales: I swung for the fence. I gave them a talk where I said, "I think we can read everything inside the Herculaneum Scrolls without opening them."

Bill Whitaker:  Did you think the papyrologists would come running to you with their scrolls and say, "Here. Here. Take a look at these?"

Brent Seales: I smile now because that is exactly what I thought.

Bill Whitaker: So how hard is it to get your hands on these scrolls?

Brent Seales: I would say somewhere in the vicinity of near impossible.

That's because they're so rare and so fragile curators are reluctant to let anyone handle them – including a superstar like Brent Seales. They wouldn't relent even after he published a paper theorizing a better way to peer inside the scrolls – with this: a synchrotron, a super powerful X-ray generated by electrons racing around this ring at almost the speed of light. There are only about 50 in the world. This one is in Britain. The X-ray is this green beam, 100-billion times stronger than any hospital X-ray. Maybe it's coincidence, but shortly after Seales published his pioneering paper, two Italian scholars stepped forward and claimed they'd had the same idea to use a synchrotron. Vito Mocella, a physicist from Naples, says he first learned about the scrolls as a child.

Vito Mocella: I cannot remember exactly the age, but nine, 10.

And Graziano Ranocchia a papyrologist – he studies ancient Roman papyrus. He pores over bits of Herculaneum scrolls at the Naples Library. Most are fragments of Greek philosophy.

Graziano Ranocchia: I am coming here and working on these papyri every day.

Call it academic competition, call it ego, but American Brent Seales, Ranocchia, the papyrologist and Italian physicist Mocella became fierce competitors -- all fighting to make history as the first to reveal the contents of the scrolls – a gladiatorial wrestling match in the hallowed halls of the Ivory Tower. Ranocchia accuses Mocella of sabotaging his research. Seales is convinced the Italians poached his idea to use the synchrotron. The mystery of the scrolls is playing out like some tragic Italian opera.

Brent Seales: You know, they say, Bill, that the reason academics argue is because the stakes are so low. Right? The stakes actually are really high. If you think about the possibility of revealing these manuscripts to the world from 2,000 years ago that no one's ever read. And, okay. So now we're gonna argue with each other? Really? I mean, maybe we could do that later after we've read them.

But the two Italian rivals used their European connections and convinced curators to let each of them – and only them – have limited access to a few scrolls to scan with the synchrotron. They leapfrogged over American Brent Seales and raced to this one in Grenoble, France. Mocella got there first.

It was hard for us to make out, but he said his scan revealed letters.

Bill Whitaker: These are letters?

Yes, he said, these are letters. Mocella won international praise and headlines as the first person to see inside one of the ancient scrolls of Herculaneum. When Papyrologist Ranocchia scanned his scrolls, he said he did Mocella one better.

Bill Whitaker: Has anyone else found anything as clear as this?

He said he saw phrases.

Graziano Ranocchia: Peys theye, namely, "They would be persuaded." This is a--

Bill Whitaker: Would be persuaded.

Brent Seales is not persuaded.

Bill Whitaker:  You don't believe that?

Bill Whitaker: Brent Seales looked at your latest findings and he says he doesn't see any letters.

Vito Mocella: I know, I don't know why.

Bill Whitaker: You don't know why?

Vito Mocella: I don't know why.

Brent Seales: I guess my threshold is somewhat different. When I see writing, you know, it should line up. It should be more than a letter or two. You ought to be able to see text that looks like something you can actually read.

Since he couldn't get access to the Herculaneum scrolls, Seales looked elsewhere to prove his algorithms and software. That led him to Jerusalem and this charred fragment, a 1,700-year-old scroll from a burned synagogue near the Dead Sea.

Brent Seales: Is there a line up here?

Israeli archaeologists didn't expect much, but what Seales' software revealed was like a miracle.

Bill Whitaker: What was it?

Brent Seales: Well, it was the Bible.

He resurrected all the surviving Hebrew script, the oldest text of the Bible as we know it today.

Brent Seales: The first two chapters of Leviticus in a scroll that, prior to that-- was assumed to be nothing or so badly damaged no one would ever know.

Bill Whitaker: This is what you hope to see in the Herculaneum scrolls?

Brent Seales: Absolutely. This is actually an identifiable text.

Following his breakthrough in Jerusalem, even Graziano Rannochia admits Brent Seales' software is brilliant. Now the Naples library, which wouldn't let Seales get his hands on the scrolls, is considering granting him access. He's convinced the secrets of Herculaneum, locked away in the scrolls for 2,000 years, are just within reach.

Inside the documents obtained from Osama bin Laden's compound
Thanks for reading CBS NEWS.
Create your free account or log in
for more features.
View CBS News In
CBS News App Open
Chrome Safari Continue
Be the first to know
Get browser notifications for breaking news, live events, and exclusive reporting.