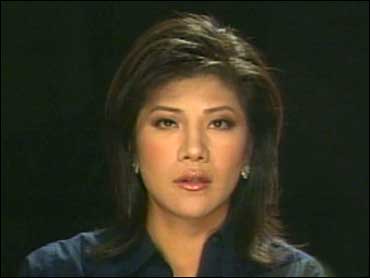 All this week, The Early Show has been featuring the people who changed the anchors' lives. Thursday, Julie Chen wraps up the series by introducing the man she credits with molding her into the woman she has become. The following is her story.

Like most other newcomers to America, my father had to face challenges that I can't even begin to imagine. But he never complained, and he never gave up. And that's why he is the person who changed my life.

The world in which my father grew up could be very cruel. As a young child, his family fled their home in Beijing to escape the invading Japanese army.

As the son of a career government official, my father was forced into exile again when the communist regime took power. His journey to Taiwan took months, but there were some bright spots on the way.

It was supposed to be just a brief stopover in Rangoon, Burma.

While he waited, my father met the woman who would become his wife.

He says, "She impressed me, for sure."

Apparently, over the course of seven to 10 days, my parents fell in love. They each had a crush on the other.

But love had to wait. My father left for Taiwan to pursue his future. And after college and a mandatory hitch in the military, he left for grad school in the U.S. But he never lost touch with the woman from Rangoon -- even though their only contact was by mail.

He says, "I started to write her letters, but I'd never see her for a very long time."

He became penpals with my mom. He wrote her for over 10 years before they saw each other again.

In 1961, my dad graduated with a master's degree in engineering. And not long after, the woman he had pursued on paper arrived.

You can still see the evidence of his persistence: he courted my mother by mail for more than a decade, and saved every one of her letters.

In time, my parents had three girls: Gladys, Vicki and me. We would be raised the old-fashioned way.

My dad basically taught me what it meant to be Chinese, in that he raised me and my sisters in a very strict, very traditional home where Mandarin was my first language.

He says, "That's what we preferred, actually. At home, we tried to speak Mandarin as much as we can."

But the lessons my father taught us go far beyond language.

He endured a three-hour commute to his job each day so we wouldn't have to change schools.

Every morning, he left that house before six o'clock -- and that sometimes meant weekends, too.

He says, "I remember one time Julie asked me, 'Daddy, why do you go to work on Saturdays?'"

I think part of the reason I have no problem working these long hours is because I learned it from my dad.

He says, "Sometimes, you have to do it yourself, show a good example. This way, they remember for a long time."

I think my father is the person who changed my life because without his strong presence, I wouldn't be where I am today.

He says, "I think we made the right decision to stay in this country and let them get a good education. I'm very happy for her. She's doing the kind of work she likes. Of course, I'm very proud of her."

I also want to say my dad could not have done all that he has without my mom by his side. I'm grateful to have both of them as my parents.
: