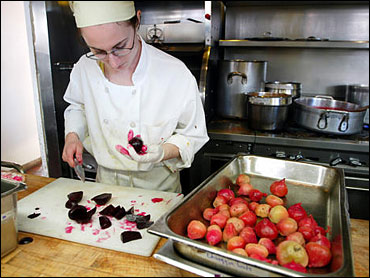 Contaminated scallions linked to a deadly outbreak of hepatitis A shouldn't scare most people away from eating more fresh fruits and vegetables, experts say.

But the only way to ensure total safety is to cook everything.

"Once food is contaminated it is hard to decontaminate, even by washing it," said John Painter, an epidemiologist with the Centers for Disease Control and Prevention in Atlanta.

Still, some basic precautions can make many foods safer. All fruits and vegetables, whether grown domestically or imported, should be thoroughly washed, and the damaged parts removed. Fruits can be peeled and the outer layers of leafy vegetables can be removed, Painter said.

"If you're healthy and don't have any particular ailments that make you susceptible, there are probably more important things you could spend your time worrying about, like the mortgage payment," said Jerry Gillespie, director of the Western Institute for Food Safety and Security at the University of California, Davis.

Concerns about food safety have grown since three people died and hundreds were sickened from hepatitis A in Pennsylvania, Georgia, Tennessee and North Carolina. The usually non-fatal virus has been linked to raw scallions from Mexico.

The Mexican government shut down four suspect companies located just south of the U.S. border for failing to "comply with good agricultural and manufacturing practices," and U.S. and Mexican food safety officials are inspecting their fields.

The CDC estimates that overall, unsafe foods cause an estimated 76 million illnesses and 5,000 deaths a year in the United States. But while consumers tend to worry more about meat, fish and poultry, fruits and vegetables should be just as much a cause for concern.

"You can't neglect taking care of it properly just because it's a vegetable," said Jay Kenyon, the operations manager at Greens, a renowned vegetarian restaurant in San Francisco.

In 2000, there were nearly as many cases of food-borne illnesses linked to produce as from poultry, beef, fish and eggs combined, according to the Center for Science in the Public Interest.

"We're changing our food system. We're increasingly dependent on sources outside of our country for food," he said. "If we're going to do that and we want to have food that is equivalently safe as food in our country, then we're going to have to insist that those foods go through the same certification that foods in the U.S. go through."

Hepatitis A — a virus that attacks the liver and can cause fever, nausea and diarrhea — can be spread through unsanitary water used to wash or store fresh fruits and vegetables. It can also be spread by poor hygiene among food handlers from the farm to the table — a journey that now stretches around the world.

There are no reliable tests for the diseases that lurk among the many millions of tons of produce consumed in America each year. "At the moment, we don't have the technology that would allow one to scan all foods to make sure they are not contaminated," Gillespie said.

In Mexico, restaurants and consumers routinely soak vegetables in disinfectant. In America, consumers tend to be more complacent. While thorough washing does help, there remains no way of making sure that green onions, alfalfa sprouts or leafy vegetables are disease-free.

That's why the U.S. Food and Drug Administration in 1977 established voluntary guidelines for suppliers that include ensuring the use of clean water, supplying field toilets for workers and tracking the use of pesticides and fertilizers.

The largest restaurant chains can demand that their suppliers, both foreign and domestic, follow those guidelines — or lose their business. Smaller restaurants and consumers have no such leverage.

At Greens, those precautions include washing everything several times with cold water. Soap, Kenyon said, is pointless, but cleanliness is essential.

"Each kind of vegetable requires a slightly different treatment. With green onions, you take them physically with your hands and run them under the water. But if you're dealing with two gallons of broccoli flowers, you set it in a tub for a few minutes," Kenyon said.

As for fresh produce sold in packages claiming it's washed and ready to eat, wash that too, Kenyon advises. He also believes in knowing the source of the food.

"We buy from a network of people locally that we've used for years," Kenyon said. "A lot of these people are not part of the agribusiness production chains. They're small business people and they take a great deal of pride in what they do."