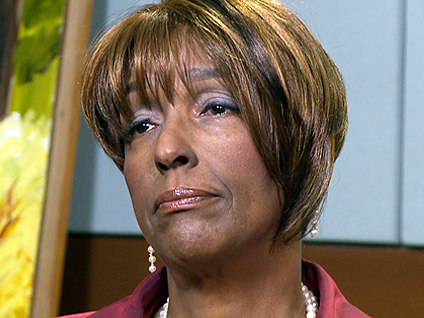 NEW YORK - They are the hardest words any terminally ill patient can hear - there's nothing more we can do. Those words are also some of the most difficult any doctor can say. But, CBS News medical correspondent Dr. Jon LaPook reports a new tool is helping patients and doctors change the way they look at end of life care.

Twenty-five percent of all Medicare spending, about $100 billion, occurs in the last year of life - in part because patients get aggressive and expensive treatments that don't work.

Fifty-three-year-old Bernadette Wilson treasures each moment with her family now more than ever.

"You've got to be kidding me," Wilson said when her doctor told her she had cancer. "It feels like the ground falls from under you."

Diagnosed with advanced pancreatic cancer, Wilson is now talking to her doctors about her final days, which is difficult with them, as well.

It's relatively easy to form a treatment plan and discuss that and focus on that," says Dr. Eileen O'Reilly, of Memorial Sloan-Kettering Cancer Center. "It's much harder again to discuss the limitations of our therapies and the fact that we're all going to die."

To make this painful discussion easier, doctors showed her a video now being used across the country in 15 health care systems to give patients more information about what really happens in the final days of an illness.

"Videos help to broach a difficult topic and to make it more real and less abstract for patients and their loved ones," says Dr. Angelo Volandes of Massachusetts General Hospital.

The videos cover a variety of illnesses: cancer, heart disease, and dementia. There are typically three options. The first - prolong life at any cost - including breathing tubes and CPR. The second offers only medical treatment, like chemotherapy and antibiotics. Finally, there's comfort care, which may include medical treatment but which focuses on relieving suffering.

For Bernadette Wilson, the videos were an eye-opener about two aggressive procedures. "CPR and putting on a breathing machine - it doesn't work for cancer patients," Wilson says. Before seeing the videos, Wilson thought "that it would probably work."

After seeing the videos Wilson told her doctors that she doesn't want to be resuscitated. "When I saw that gentleman laying there on that ventilator - that was difficult. I wouldn't want that for me or anyone else."

Studies show that most patients who watch these videos change their minds about what they want and choose less aggressive care.

Why is it so hard for doctors to talk about this? It can be very tough to bring up an end of life discussion when the patient says "I'm going to beat this thing."

But the mistake of waiting too long is a complete disservice to patients. It can leave them in pain, unprepared for the last days of their lives.