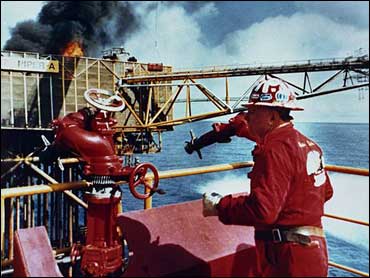 Oil field firefighter Paul N. "Red" Adair, who was instrumental in capping Kuwaiti oil wells set ablaze by Iraq and was immortalized by John Wayne in a movie based on his life, has died at the age of 89.

Adair, who boasted that none of his employees ever suffered a serious injury fighting hundreds of dangerous well fires around the world, died Saturday of natural causes at a Houston hospital, his daughter, Robyn Adair, told The Associated Press.

"It scares you: all the noise, the rattling, the shaking," Adair once said, describing a blowout. "But the look on everybody's face when you're finished and packing, it's the best smile in the world; and there's nobody hurt, and the well's under control."

His daring and his reputation for having never met a blowout he couldn't cap earned him the nickname "Hellfighter." That inspired the title of the 1968 John Wayne movie based on his life, "The Hellfighters."

"That's one of the best honors in the world: To have The Duke play you in a movie," Adair said.

He founded Red Adair Co. Inc. in 1959 and is credited with battling more than 2,000 land and offshore oil well fires, including the hundreds of wells set afire when the Iraqi army retreated from Kuwait during the Gulf War in 1991.

He proudly spent his 76th birthday in Kuwait clad in his trademark red overalls, swinging valves into place atop out-of-control wells.

"Retire? I don't know what that word means," he told reporters at the time. "As long as a man is able to work and he's productive out there and he feels good — keep at it. I've got too many of my friends that retired and went home and got on a rocking chair, and about a year and a half later, I'm always going to the cemetery."

Adair, who finally did retire in 1994 and sold his company, was instrumental in expediting the shipment of crucial supplies and equipment to Kuwait by testifying before the Gulf Pollution Task Force and meeting with then-President George H.W. Bush about the logistics of the firefighting operation.

Adair's teams were among the first of 27 teams from 16 countries that spent eight months capping 732 Kuwaiti wells. Thanks in part to his expertise, an operation expected to last three to five years was completed in nine months, saving millions of barrels of oil and stopping an intercontinental air pollution disaster.

However, he said government red tape hindered the process.

"It's ridiculous. I've been doing this for 50 years and I've never been in a situation like this before in my life where it goes through so many changes of command to get the equipment we need," said Adair. "You need one man at the top so if I say I need 19 bulldozers ... I get 19 bulldozers."

His death-defying feats included battling the July 1988 explosion of the Piper Alpha platform that killed 167 men in the stormy North Sea, 120 miles off the coast of Scotland.

Adair, who never showed fear in life, joked in 1991 that the hereafter would be no different.

"I've done made a deal with the devil," Adair said. "He said he's going to give me an air-conditioned place when I go down there, if I go there, so I won't put all the fires out."