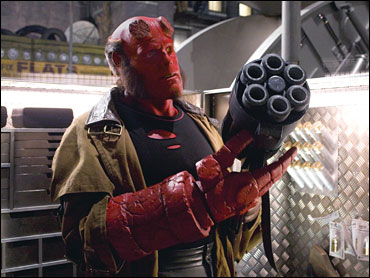 Superheroes battling inner demons often rule the box office. This time, the superhero was a demon as "Hellboy II: The Golden Army" pulled in $35.9 million to debut as the No. 1 weekend film.

Universal's "Hellboy" sequel, starring Ron Perlman as the red-skinned devil fighting for the good guys, took over the top spot from Will Smith's superhero tale "Hancock," which slipped to second place with $33 million, according to studio estimates Sunday.

Opening at No. 3 with $20.6 million was New Line's "Journey to the Center of the Earth," starring Brendan Fraser in an underground adventure shot in digital 3-D.

Eddie Murphy bombed with his comedy "Meet Dave," a 20th Century Fox release that took in just $5.3 million. The movie features Murphy in dual roles as a tiny alien and his spaceship — which is designed to resemble a full-sized human for a visit to Earth.

"It was a tough concept to get across," 20th Century Fox distribution executive Bert Livingston said of "Meet Dave," which cost about $55 million to make. "It's upsetting for all of us and for Eddie. He's very funny in this. Just not enough people came."

Science-fiction comedy has not been a kind genre for Murphy. His biggest bomb ever was the sci-fi tale "The Adventures of Pluto Nash," which cost about $90 million and took in just $4.4 million during its entire run.

"Hellboy II" was a rare case of one studio taking on another's hand-me-downs. Sony released the first "Hellboy" in 2004 but passed on the sequel, which allowed Universal to step in.

The original movie was a modest box-office performer, hauling in $23.2 million over opening weekend and $59 million in its entire run. However, it really caught fire on DVD, convincing Universal executives that a sequel was in order.

"When a film is a franchise that another studio didn't want to continue to pursue, it makes things even better," said Nikki Rocco, head of distribution at Universal. "We believed in the filmmakers, the talent packaged together. We saw the potential."

Guillermo del Toro ("Pan's Labyrinth") returned to direct the sequel, which pits Perlman's Hellboy against an elf who aims to unleash a monstrous mechanical army on humanity.

"`Pan's Labyrinth' made a big impression on a lot of people," said Paul Dergarabedian, president of box-office tracker Media By Numbers. "If they weren't fans of Guillermo del Toro before, they certainly are now."

"Journey to the Center of the Earth" stars Fraser in a modern twist on Jules Verne's classic tale about a trip to the planet's core.

Though 3-D screens accounted for fewer than a third of 2,811 theaters where the movie played, those cinemas pulled in $11.7 million, well over half of the picture's revenues, according to Warner Bros., which handled its distribution.

Warner had to book the movie largely in traditional 2-D theaters because not enough cinemas have been converted to projectors capable of showing digital 3-D movies.

"We would have liked to have more of these," said Dan Fellman, head of distribution for Warner.

Overall Hollywood revenues fell compared to the same weekend a year ago, when "Harry Potter and the Order of the Phoenix" opened with $77.4 million. The top 12 movies took in $145 million, down 16 percent from the same weekend in 2007.

However, Batman arrives Friday to heat up the box office again. The Batman sequel "The Dark Knight" is one of the year's most-anticipated films even without the death of co-star Heath Ledger. His death and the buzz over his maniacal performance as Batman nemesis the Joker has fans in a frenzy to see the movie.