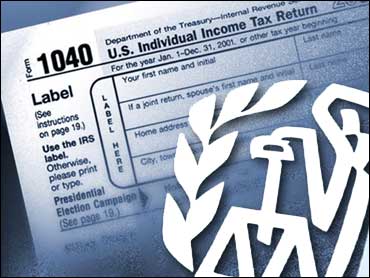 The tax code is the greatest testimonial to our inability to solve a problem we created, says CBSNews.com's Dick Meyer in his latest Against the Grain commentary.

"There is going to be a revolt in this country over the income taxes."
- Treasury Secretary Joseph W. Barr, January 1969

The Soviet Union collapsed. The Berlin Wall crumbled. The Queen Mum is dead, "Wall Street Week in Review" is off the air and Mike Wallace is going part-time. But the Internal Revenue Code stands tall and grows mightier by the hour.

The U.S. tax code is the most sadistic device ever devised by the bureaucratic mind. It is an epic devourer of time, money, sanity and American ingenuity. Its complexity is indefensible. It is evil, the Lord Voldemort of American government.

This conclusion is inescapable regardless of your fiscal religion. It doesn’t matter if you think taxes are too high or too low, too progressive or too regressive, too round or too flat. It is the complexity, the immensity, the indecipherability, and the inanity of system that is the enemy. On that, everyone agrees.

Yet our tax system has withstood assault from generations of Treasury Secretaries, Senators, candidates, Nader's Raiders, flat tax crusaders, fat cats, consumption tax zealots, tax lawyers, scam artists, and every normal person who has ever tried to fill out a tax return. And it keeps on growing.

I heard Daniel Patrick Moynihan give a pretty good one-sentence answer about 18 years ago. Taking on the tax lobbyists, he said, "Is like pitting your kidneys against a brewery."

I know, I know: gross over-simplification. There are lots of reasons why the tax code is so complex and difficult to comply with.

Businesses and personal finances are complicated, so the tax laws are too. Way back in 1927, the Joint Committee in Internal Revenue Taxation declared that, "It must be recognized that while a degree of simplification is possible, a simple income tax for complex business is not."

But that does not explain, and it certainly does not justify, the mind-boggling complexity, inefficiency and absurdity of a set of tax laws that now runs over 7 million words.

Ponder a few factoids to renew your taxpayer’s outrage:

The tax code contains five different definitions of what a child is. Depending on whether you're trying to figure dependent exemptions, head-of-household filing status, child tax credit, child care tax credit or earned income tax credit, you have to wade through five different sets "bewildering rules" defining a child, according to the Administration's 2003 budget message.

It costs an estimated $194 billion a year for businesses and individuals to comply with the tax laws, according to the Tax Foundation, a conservative research group. These are the direct costs (paying the tax lawyers and accountants and filling in the forms), not the indirect costs (time spent on tax planning, tax litigation, capital directed to tax compliance rather than productive investment).

Since 1954, Congress has enacted 33 significant changes in the tax laws, one every 1.4 years.

In short, the tax code is so complex because Congress made it that way. The tax code is by far the richest source of goodies for officeholders to hand out. The tax lobbyists, to be fair, are the enablers.

You can’t put a $500 million handout to a local company in the budget, but you can easily create an unnoticed loophole in the tax code that will save that company $500 million. Similarly, Congress couldn’t, say, write checks to everyone who wanted to buy a house, but it could pass a home mortgage deduction.

Spend a couple decades making loopholes for various industries, even specific companies, or creating incentives for various socially desirable goals (from charitable giving to weight loss), raising and lowering rates to sail on the political winds and lo and behold, the system is a mess.

No one defends the current system. Not the IRS Commissioner, not the Treasury Secretary, not the President.

Yet tax simplification has vanished as an issue.

In the 1980's, tax reform was a hot issue that attracted rising stars on all horizons, like Bill Bradley, Jack Kemp, and Dick Gephardt. The basic idea was to get rid of all the loopholes, credits, and deductions in order to radically lower rates and simply the entire process.

A decade later, Steve Forbes based his whole presidential campaigns on tax simplification and got surprisingly far.

In February O'Neill talked tough on tax reform with all the genuine credibility of a businessman who was wasted years on tax issues. He committed the Administration to a tax simplification program, but we've heard nothing about it since.

Campaign finance reform is not an end in itself. Its ultimate goal is to remove obstacles to passing laws on their merits, not on the bankrolls of their backers.

Tax reform would be a good test campaign finance reform.