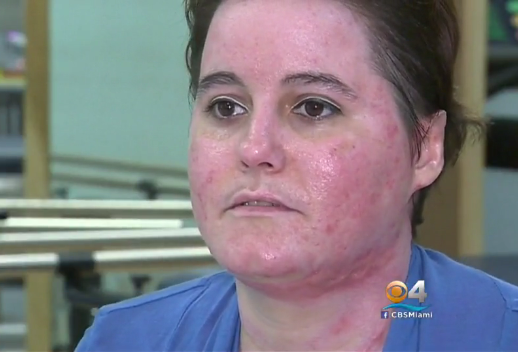 MIAMI -- A woman whose estranged husband was arrested for dousing her with gasoline and setting her on fire is talking about the horrific ordeal for the very first time, CBS Miami reports.

“I couldn’t imagine this would happen because we had a good relationship, but the love was over,” said Heilyn Hernandez.

Her therapist explained they’re working on stretching her new skin that covers more than 40 percent of her body. Grafts taken from her legs replace the skin consumed by flames on her arms, chest and back. They are tense and without therapy would limit her mobility.

Hernandez’s hair, once long, is now short and choppy, cut off after also catching fire.

Her life changed in September 2016. Hernandez was arriving for work at Nature’s Sleep in Plantation in South Dade county when she says she spotted her estranged husband.

“He came running fast towards me, so I turned on the car and I tried to get back and get out of there,” explained Hernandez.

Surveillance video from Nature’s Sleep shows she couldn’t get away. The video shows a man cornering her, like prey.

Hernandez doesn’t finish the sentence. She shakes her head side to side when asked if she could imagine what happened next, saying, “It was so fast.”

Hernandez was doused in gasoline and set on fire. She says a worker at the nearby MD Now Urgent Care saw what happened and came to her rescue, telling her to drop and roll, than walking her to the urgent care center.

“I was just thinking about my daughter and my mom ‘cause they were at home, and I asked the police to take care of them.”

Hernandez was airlifted to Ryder Trauma Center in Miami where doctors say her life was on the line. Dr. Carl Schulman treated Hernandez when she came in.

It was months before Hernandez would carry her young daughter again. That desire to be a mom is what she says motivated her to not give up.

“I want my life back. I want to do everything I was doing before,” she said. “I have my daughter and I have to be there for her, and not just ‘be there’, be there!”

As for her estranged husband, Noel Garcia De Armas, he faces attempted murder and other charges. When asked if she has any words for him, she said, “No, I left that in God’s hands.”

Hernandez has about another two months of occupational therapy and after that, at least another year of doctors’ visits and perhaps even additional surgeries. Doctors say her prognosis is good.