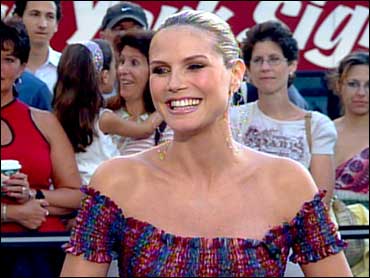 Heidi Klum may just be the hardest working woman in fashion. She's a world famous model, the host and executive producer of the hit reality show "Project Runway," and she's expecting her third child.

As if that's not enough, she has signed on to be the spokeswoman of the new Body Bra by Victoria's Secret and face of the campaign in her spare time.

Klum visited The Early Show to talk about her new project, which involves a line of bras named after her nickname in the business, "The Body."

"This is the new Victoria Secret bra they just came out with and they called it 'The Body,' which was one of my nicknames that I started having when I started work with Victoria's Secret, which was a huge honor for me," says Klum. "Now it's a big honor having a bra named after my nickname that people know in the business, 'The Body.' And this is probably one bra that every woman wants to have because it is so comfortable. It comes eight different colors, it has no seams, no stitches. It is not the super sexy, lacy bra, but this is something functional that you want to have every day that is super comfortable and just great."

The supermodel, who is halfway through her pregnancy, shot the ad while she was already expecting. A prop helped her hide the pregnancy on camera. "I had a chair to work with that I could hide behind a little bit. It all worked out fine," she explains.

Asked where the nickname "The Body" came from, Klum says, "I don't know. It just kind of happened. I was one of the first new girls at Victoria's Secret when I started with them about seven years ago. They nicknamed me 'The Body' when I did the first Victoria's Secret fashion show with them. It was an honor for me. They put it in the paper. It was a big thing."

"I would eat so many muffins and brownies, but more muffins. Like every day I would have a muffin, so they'd call me the 'Muffin' because I was always stuffing my face with muffins. I love them because in Germany we have no muffins," she explains.

Her show, "Project Runway," is in its third season and Klum is up for an Emmy.

Asked how the show is going, Klum says: "Very good. I mean, right now I think four or five weeks into the show. Now we know we filmed it awhile back. Now our designers, our finalists are all home working on their final collection for fashion week in September.

"So this is a great thing for them because they all want to be designers and they get seen on television that can show people what their talent is about. It was a lot of fun being there and watching the whole process and seeing what they come up with every week. They are really, really talented people. I think it's fun for people to watch it and that's why they really enjoy the show because they love watching what people can do with their hands in such a short time."