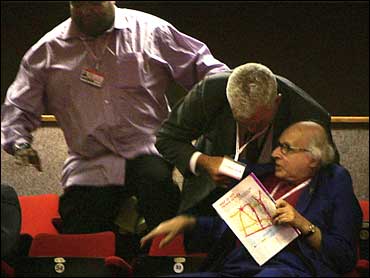 
British Prime Minister Tony Blair's normally smooth officials have been left gaping and groveling after one of the biggest PR fiascos of his Labour Party tenure.

Two burly security officials bundled an 82-year-old man out of Labour's annual conference this week after he heckled Britain's Foreign Secretary, Jack Straw, during a speech on Iraq.

Straw was telling conference delegates that Britain was in Iraq for one reason only — to help bring democracy to the country — when Walter Wolfgang shouted, "Nonsense. You know that's a lie."

Even though — or perhaps because — millions of Britons probably agree with Wolfgang, he was immediately manhandled out of his seat.

Unfortunately for Tony Blair and his party, the television cameras were right there, broadcasting it all live to an incredulous Britain.

Then it got worse.

It turned out that Wolfgang — since dubbed the Hero Heckler — was a Jewish refugee to Britain, and a party loyalist who had faithfully attended Labour conferences since 1955.

When Wolfgang, along with another party member who had come to his rescue, tried to get back in to the conference, they were detained under anti-terrorism laws.

"Freedom of Speech in Blair's Britain," blazed the headline in the Daily Mail over pictures of a bouncer with muscles like watermelons lifting a frail Wolfgang by the scruff of the neck.

"Our PM is nothing but a bully — just ask old Walter," said the Telegraph.

And borrowing an iconic line from the TV series "Fawlty Towers" (spoken by John Cleese as he goose-stepped around some German visitors), The Independent's headline read simply "Don't Mention the War."

In fact, until Wolfgang's heckle, nobody was mentioning the war in Iraq much at the party conference, at least not publicly. Delegates complained the silence on the subject was deafening as party organizers and spin doctors worked to steer debate away from what many Labour supporters see as an immoral debacle.

It all underlines what a slick political machine Tony Blair has fashioned from the argumentative and rambunctious Labour Party of old, preoccupied with class warfare and workers' rights. In those days, every party conference proudly boasted at least one rowdy dustup.

But when does a slick political machine become a politically correct dictatorship?

"You cannot stifle debate by hiring heavies. A party has got to be open to the world," said Wolfgang after he had finally been let back into the conference. "The Labour party must get back to its culture of being open to argument."

"I am very sorry but I wasn't there," he repeated on practically every radio and television channel in Britain.

But it has not deflected public outrage.

One old man's outburst has focused the country's attention right where Mr. Blair didn't want it: on the war in Iraq, on new draconian anti-terrorism laws and his own administration's reputation for bullying dissenters.