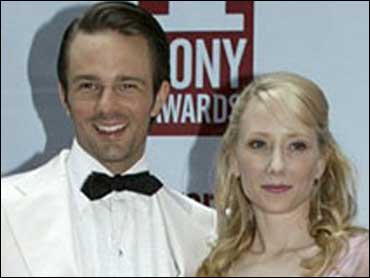 Anne Heche's divorcing husband wants at least $33,000 a month in support and joint custody of the couple's 5-year-old son, saying the 37-year-old actress is a bad mother.

In Superior Court filings this month, Coleman Laffoon says Heche has refused to allow their son, Homer, to be enrolled in a private kindergarten in Southern California and has said she wants the boy to move to Vancouver, Canada, where she spends part of the year filming her ABC-TV show, "Men in Trees."

In Vancouver, Heche leaves their son with a series of different nannies or her assistant in her trailer while filming, Laffoon said.

Heche's "anger toward me has clouded her ability to think rationally about what is in Homer's best interest," said Laffoon, who wants Heche ordered to sign their son's school paperwork.

Laffoon said Heche made some "very poor" parenting decisions in Vancouver, such as failing to provide a car safety seat for Homer and making lunches he didn't like.

After one visit, she forgot to return Homer's favorite shoes and "his bedtime stuffed animals, which are very important to him and which caused him extreme distress," Laffoon said.

Laffoon and Heche were married in September 2001. He filed for divorce in February, citing irreconcilable differences.

"It is disappointing that Coley Laffoon has resorted to filing lies with the court because Anne would not cave in to his astronomical monetary demands, including his demand for $45,000 a month in support," Heche's publicist, Lisa Kasteler, said in a statement Friday. "For the past several years, the child's father has refused to get a job in order to contribute financially to the child's care."

Laffoon, a former freelance videographer who made $6,000 a year, said he didn't work during the marriage. The couple agreed he would be a stay-at-home father because of his experience as a former nanny and summer camp counselor, his documents contend.

He estimated that living expenses for himself and their son, who lives with him, total $37,399 a month. An accountant hired on Laffoon's behalf submitted a court paper offering a guideline of $45,239 for monthly spousal and child support.