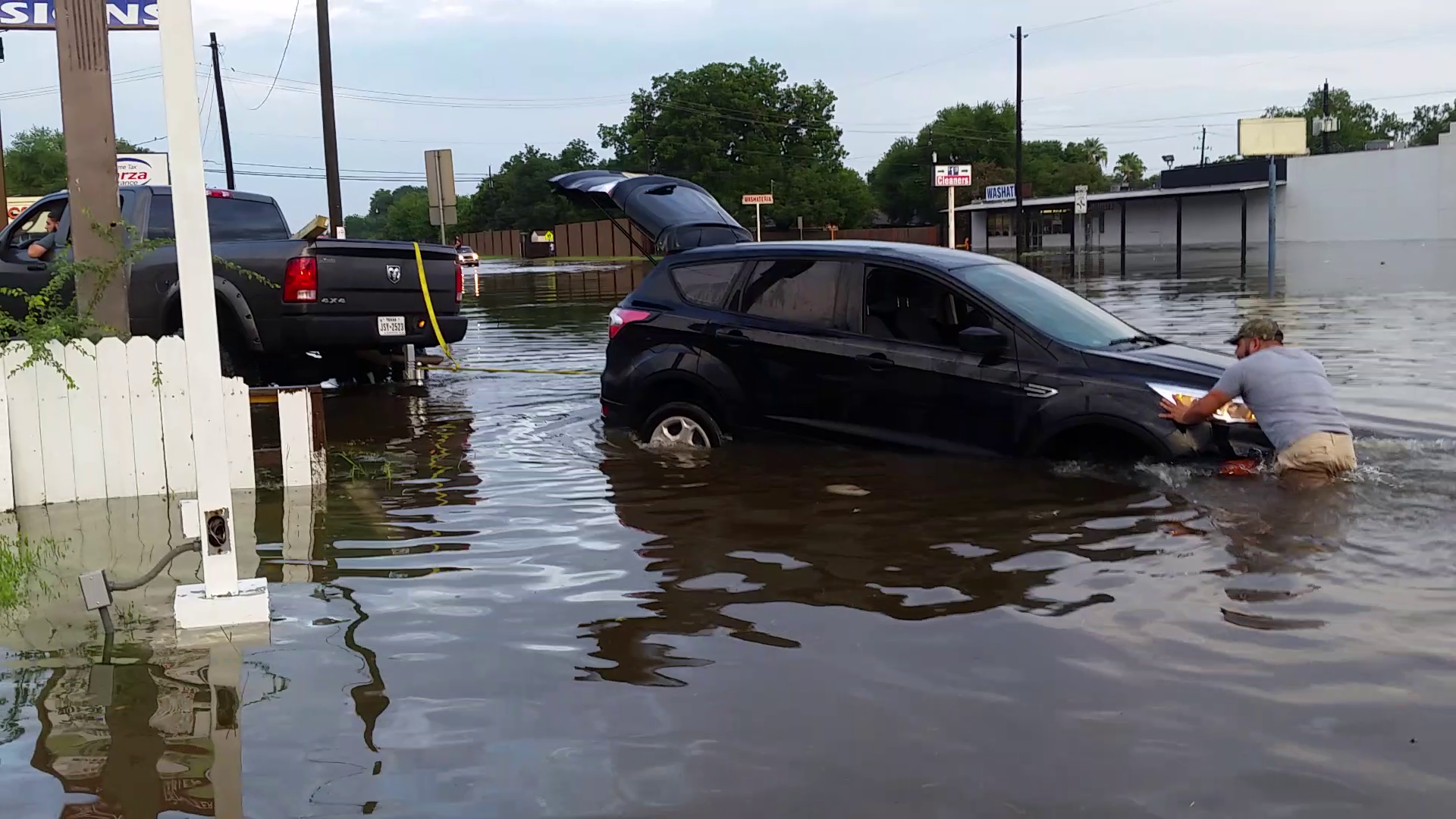 HOUSTON -- Heavy rains that caused flooding in some parts of the Houston area and prompted about two-dozen water rescues on Tuesday seemed to have let up, but with more rain expected authorities remain on guard and residents should stay prepared, officials said.

"Unfortunately, this is one of those Texas flood events that's part of living in Southeast Texas," said Michael Walter, a spokesman for Houston's Office of Emergency Management.

While the thunderstorms that dropped up to 5 to 6 inches of rains in some parts of Houston overnight into Tuesday have mostly moved out of the area, additional storms could pop up Tuesday afternoon, which could cause additional flooding in areas already saturated by rainfall.

"We don't want anyone to let their guard down just because it stopped raining for now," Walter said.

The National Weather Service has issued a flash-flood watch for the region until Wednesday morning.

Tuesday morning a reporter from CBS affiliate KHOU-TV was streaming live from southwest Houston in the midst of the flooding when a small pickup struck the back of a car. The crash did not appear to be serious enough to cause any injuries, KHOU-TV writes, and was located in a spot that regularly floods when heavy rain hits.

Jeff Lindner, a meteorologist with the Harris County Flood Control District, said he expects some homes and structures will be flooded but that tally is still being determined. Houston is located in Harris County.

An expected break in the rainfall on Tuesday should help waters recede from area bayous and streets, Lindner said.

Many of the streets and neighborhoods that got flooded on Tuesday were locations that have had flooding in the past, Lindner said.

"This is one of the more kind of marginal rain events, where the rain stopped just an inch or two before we really got into serious problems and potential to affect a lot of homes," Lindner said.

For the most part, the area's system of bayous and other man-made channels that dispatch storm runoff to the Gulf of Mexico "did a good job even though the ground was wet and the rainfall was very intense overnight," Lindner said.

According to the flood control district, only a few local bayous had overflowed their banks and were causing some flooding of homes and businesses. But levels on most other waterways were falling and many streets that had been flooded earlier were once again open by Tuesday afternoon.

A Houston business owner whose store was flooded says he got about 1 foot of water in his resale shop and will have to throw away at least $2,000 worth of merchandise.

Jose Luis Ruiz sat inside his shop in North Houston Tuesday afternoon after sweeping out water and moving soggy merchandise, including furniture, suitcases and small appliances, outside to dry.

The shop is in a strip mall located behind Halls Bayou, one of the many waterways that help channel storm runoff to the Gulf of Mexico. Halls Bayou overflowed from its banks, flooding streets and structures.

Ruiz says his business has flooded twice before and he's looking to move.

Officials are still determining how many businesses and homes were flooded on Tuesday.

Meanwhile, KHOU-TV reporter Jason Miles caught this unusual sight while covering the local flooding: a man in a monster truck helping a stranded driver. He posted the video online:

KHOU-TV reports that much of the heavy rain has moved east and daytime high temperatures will increase back into the low-90s by Thursday.

The same storm system that hit Houston also brought widespread flooding to San Antonio and other areas on Monday. The San Antonio area was mostly clear on Tuesday with some scattered showers and thunderstorms.

In one spot, police in San Antonio cited a woman after she got trapped in high waters twice in the same day, according to CBS affiliate KENS-TV.

Her car got stuck and she needed to be rescued by the San Antonio Fire Department -- but then she returned to the car to retrieve the keys from the submerged vehicle. She was swept away at that point, but managed to get out of the water.

She received three citations for disobeying a warning sign, failure to obey a police officer and driving past barricades, KENS-TV writes.

A local reporter at the scene described the situation in a video posted to Facebook:

While flooding is nothing new in Houston, the nation's fourth-largest city has had more frequent and destructive floods in its recent history.

Since 1986, extreme downpours -- the type measured in double-digit inches -- have occurred twice as often as in the previous 30 years, an AP weather analysis last year showed.

Unrestrained development in Houston -- the only major U.S. city without zoning rules -- has also meant more pavement and less water-absorbing wetlands that could help mitigate flooding.