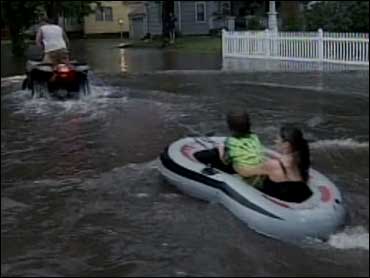 Motorists were likely to confront barricades in much of Kansas on Thursday after torrential thunderstorms swamped already saturated ground and raised some streams out of their banks.

"I've never seen it this bad in my life!" a Hutchinson resident told CBS affiliate KWCH.

From Garden City in the southwest to Belleville in the north-central region near Nebraska, waves of violent, slow-moving storms on Wednesday dropped several inches of rain while pelting the countryside with large hail.

Reno County and other central Kansas counties recorded the heaviest amounts — as much as 2 inches of rain an hour, with 7 inches recorded at Hutchinson by 8 p.m.

No injuries or property damage were immediately reported, but many motorists had to be helped from their cars as water several inches deep washed over city streets.

"It was a lot deeper than I expected, so I tried getting over in the center, and tried to get not as much water there, and it still got me," a motorist told KWCH.

"Seems like people aren't smartening up at all," said another, watching motorists drive into — but not out of — flooded intersections.

The American Red Cross opened a shelter at a Hutchinson church for people needing a dry place to spend the night.

"In some places, there are people with water up to their porches," Forbes said about 8:30 p.m. "We are relocating them to higher ground or transporting them" to the church.

Seven people were temporarily stranded inside Triffet's North Main Barbershop, where owner Frank Triffet was forced to sandbag around the door to keep water from creeping into his business. He was especially annoyed by drivers of large pickup trucks who deliberately drive fast enough to spray the water.

"When they drive through, the waves go up to the door. They cause misery for all of us; we're all in the same boat," Triffett said.

The last customer of the day, Richard Hall, arrived at the shop at 3:30 p.m. and was still trying to leave more than three hours later.

"The rain stops and starts again in 10 minutes," Hall said.

A levee protecting the rural eastern part of the Reno County from the Arkansas River broke in several places during heavy rain in early May, and inspectors were taking their first look Wednesday at the breaks and considering how to repair them.

To the north in McPherson County, emergency management officials closed all county roads in the southern half of the county and advised motorists to stay out of the area.

As the storms spread northward late Wednesday, flash flooding was reported on many roads in the city of Ellsworth.

And in Republic County, water ran 8 to 10 inches deep along streets in South Belleville, stalling out several cars.

The same storm system also spawned brief tornadoes in southwest Kansas. Touchdowns were reported near Kinsley and Centerview in Edwards County and just east of Syracuse in Hamilton County on the Colorado border.

Thursday's forecast called for clearing skies from west to east across the state.