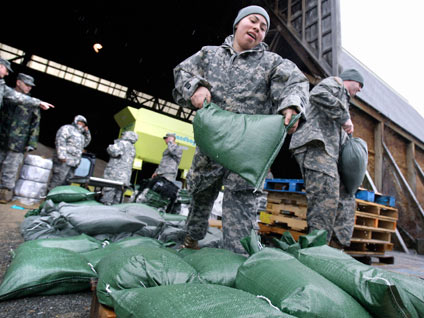 Coalition forces battled militiamen loyal to radical Shiite cleric Muqtada al-Sadr in several Iraqi cities Friday, saying they killed about 300 militants in Najaf over two days of fighting. Battles in other Shiite areas of the country have killed dozens more, according to Iraqi authorities.

Two U.S. Marines and an American soldier were killed in Najaf on Thursday, and 12 troops were wounded, the military said. Fifteen U.S. soldiers were wounded in Baghdad.

In Najaf, 100 miles south of Baghdad, U.S. helicopters on Friday attacked militants hiding in a cemetery near the Imam Ali Shrine in the old city at Najaf's center, where smoke could be seen rising.

The fighting began Thursday in Najaf and has since spread to other Shiite areas across the country, as the truce that marked an end to a similar rebellion two months ago appeared to have been shattered.

Al-Sadr blamed the United States for the violence in Iraq in a sermon read on his behalf Friday in the Kufa Mosque close to Najaf.

The interim government had called America "our partner," he said. "I say America is our enemy and the enemy of the people, and we will not accept its partnership."