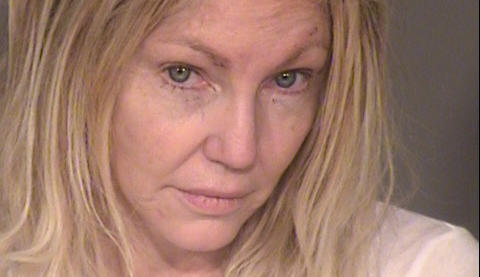 Just over a month after police raided Heather Locklear's home to search for a firearm after she allegedly threatened to shoot law enforcement officers, the actress is in trouble again. Locklear was arrested late Sunday night for allegedly battering a police officer and emergency personnel. Hours after her release, officers were called to her home again after someone there suffered an apparent overdose.

The Ventura County Sheriff's Department told CBS Los Angeles that the 56-year-old was arrested on Sunday and booked early Monday morning after they responded to a call at her Thousand Oaks home Sunday night. They said Locklear was heavily intoxicated and arguing with friends and family before she attacked the deputies and kicked a medic in the chest. She was held on $20,000 bail and is set to make her first court appearance Tuesday.

TMZ reports that hours after Locklear returned home, she was sent to the hospital after officers got a call that someone at her home had overdosed. A spokesperson for the Ventura County Sheriff's Office told ET, "We did go to her house this afternoon about 3 p.m. along with fire department and ambulance personnel and when everyone arrived on scene they determined that it was a medical issue and a patient was transport from the house to a local hospital."

Locklear, best known for her roles on "Dynasty" and "Melrose Place" in the 1980s and '90s, was also arrested in February on suspicion of domestic violence and battering a police officer. CBS Los Angeles reports that just last week, she was hospitalized for a psychiatric evaluation.