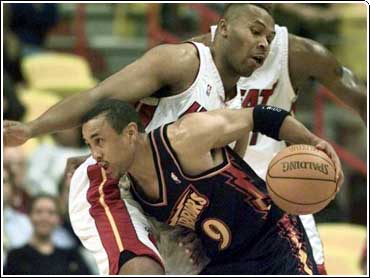 Rebounding was the difference for the Miami Heat on Wednesday night.

P.J. Brown grabbed 13 rebounds, including nine in a decisive third quarter, and Alonzo Mourning had 12 as the Heat beat the Golden State Warriors 115-100.

"We were more aggressive and we rebounded the ball better," said Mourning, who had six rebounds in the third quarter. "That was the game right there."

Brown scored seven points and Mourning six during a 16-5 run that gave Miami an 87-75 lead with 1:14 left in the third. The Heat maintained a double-digit advantage the rest of the way.

In all, Miami outrebounded Golden State 48-35.

Jamal Mashburn scored 26 points for Miami, his fifth straight game with 20 or more. Mourning scored 17, as did rookie Rodney Buford, his season high.

"I have a great deal of respect for their toughness," Golden State coach Garry St. Jean said.

Mourning left with 1:01 to play after landing on his right wrist while fighting for a rebound.

Miami built a 10-point lead late in the second quarter, but Golden State scored the final nine points of the period, four by Dampier, closing to 59-58 at halftime.