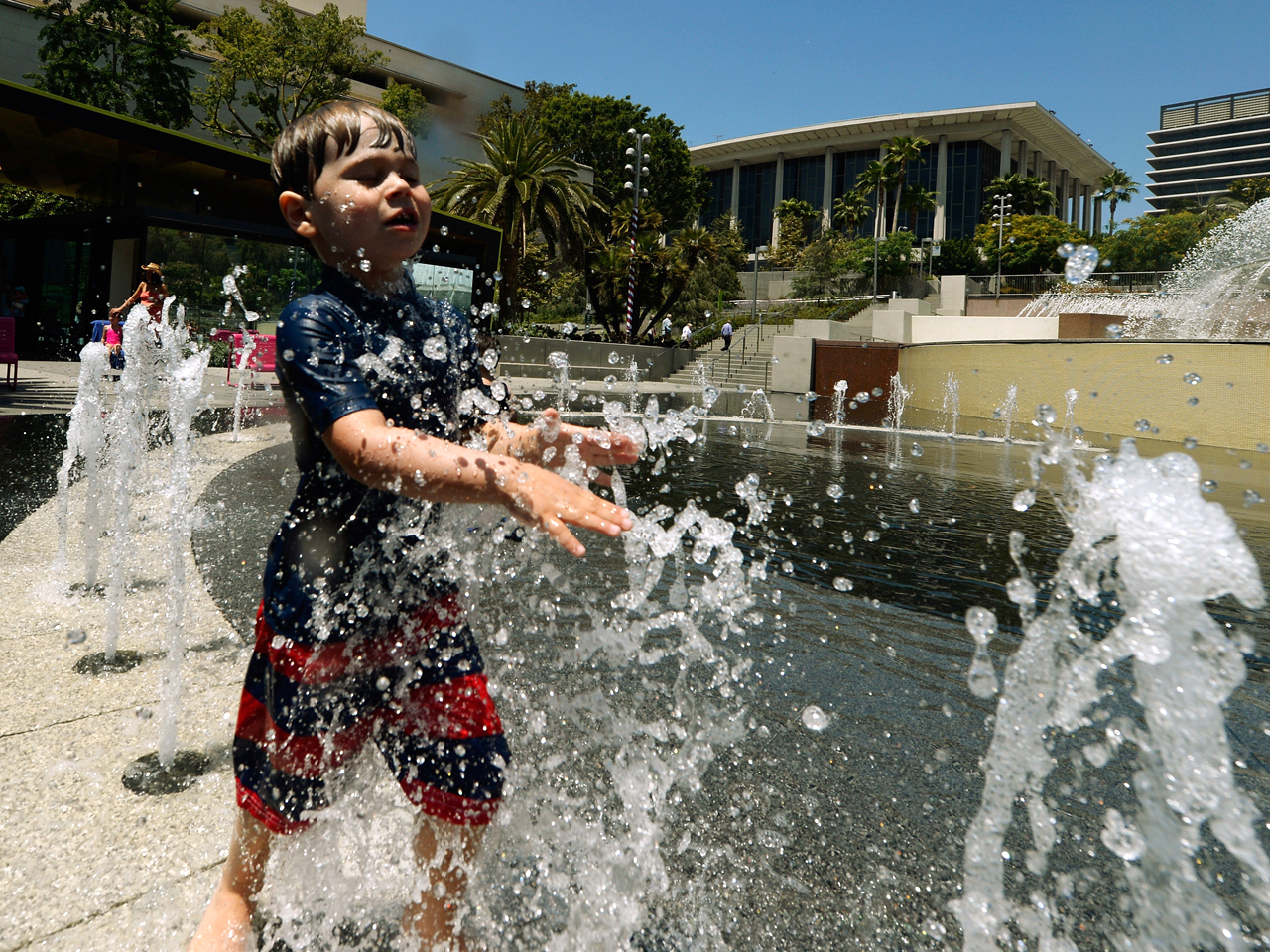 PHOENIX A blazing heat wave expected to send the mercury soaring to nearly 120 degrees in Phoenix and Las Vegas settled over the West on Friday, threatening to ground airliners and raising fears that people and pets will get burned on the scalding pavement.

Meteorologist Jeff Berardelli of CBS station WFOR-TV told "CBS This Morning" that the extreme heat "is going to be about as extreme as it gets. In fact, almost a once-in-a-century-type heat wave in the deep Southwest."

The National Weather Service warned that exceedingly hot temperatures are expected through Monday, with little relief expected at night, and that the heat wave has the potential to be a life-threatening heat event for those at risk.

The heat was so punishing that rangers took up positions at trailheads at Lake Mead in Nevada to persuade people not to hike. Zookeepers in Phoenix doused elephants with water and fed tigers frozen fish snacks. And tourists at California's Death Valley took photos of the harsh landscape and a thermometer that read 121.

The mercury there was expected to reach nearly 130 on Friday — just short of the 134-degree reading from a century ago that stands as the highest temperature ever recorded on Earth.

"You have to take a picture of something like this, otherwise no one will believe you," said Laura McAlpine, visiting Death Valley from Scotland.

CBS News correspondent Bill Whitaker reported that California is expecting demand for electricity to heat up. Steve Berberich oversees the state's power grid. "Turn up your air conditioner just a couple of degrees," he advised. "It may be a little bit uncomfortable, but it's a lot more uncomfortable if you don't have enough power."

The heat presented problems for airlines because extreme temperatures make it difficult for smaller planes to lift off. When the air gets so hot, it becomes less dense, requiring longer runways and less fuel in the tanks to reduce weight.

Officials said big jetliners function fine in the heat, but smaller regional airlines may have delays.

The National Weather Service said Phoenix could reach 118 on Friday, while Las Vegas could see the same temperature over the weekend in what would be a record for Sin City. The record in Phoenix is 122.

Temperatures are also expected to soar across Utah and into Wyoming and Idaho, with triple-digit heat forecast for the Boise area.

Cities in Washington state that are better known for cool, rainy weather should break the 90s next week, while northern Utah — marketed as having "the greatest snow on Earth" — is expected to hit triple digits.

The heat wave is not expected to break until Monday or Tuesday.

"This is the hottest time of the year, but the temperatures that we'll be looking at for Friday through Sunday, they'll be toward the top," said National Weather Service meteorologist Mark O'Malley. "It's going to be baking hot across much of the entire West."

The heat is the result of a high-pressure system brought on by a shift in the jet stream. The jet stream, the high-altitude air current that dictates weather patterns, has been more erratic in the past few years. Scientists disagree on whether global warming is the cause.

Alexander Gershunov, who studies climate change at Scripps Institution of Oceanography, said western heat waves are changing, CBS News reported. "The new type of heat waves that are becoming increasingly frequent are humid heat waves," he said, "and with high humidity, we actually have much hotter nighttime temperatures."

Health officials warned people to be extremely careful when venturing outdoors. The risks include not only dehydration and heat stroke but burns from the concrete and asphalt.

"You will see people who go out walking with their dog at noon or in the middle of the day and don't bring enough water and it gets tragic pretty quickly," said Bretta Nelson, spokeswoman for the Arizona Humane Society. "You just don't want to find out the hard way."

Cooling stations were set up to shelter the homeless as well as elderly people who can't afford to run their air conditioners.

Officials said personnel were added to the U.S. Border Patrol search and rescue unit because of the danger to people trying to slip across the Mexican border. At least seven people have been found dead in the last week in Arizona after falling victim to the brutal desert heat.

In June 1990, when Phoenix hit 122 degrees, airlines were forced to cease flights for several hours because the planes didn't have the data needed to know how they would fly in temperatures above 120.

US Airways spokesman Todd Lehmacher said the airline's Boeings can now fly at up to 126 degrees, and its Airbus fleet can operate at up to 127.

While the heat in Las Vegas is expected to peak on Sunday, it's not expected to sideline the first round of the four-week Bikini Invitational tournament.

"I feel sorry for those poor girls having to strut themselves in 115 degrees, but there's $100,000 up for grabs," said Hard Rock casino spokeswoman Abigail Miller. "I think the girls are willing to make the sacrifice."