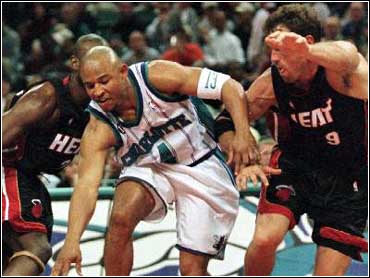 Alonzo Mourning smiled, sat back in his chair in the Miami locker room and nodded approvingly. His supporting cast was back, and with it came a rare road victory for the Heat.

With Dan Majerle back in the lineup after a broken leg and Tim Hardaway playing his best game since returning from a knee injury, the Heat ended a three-game slide on the road with an 85-80 victory over Charlotte on Sunday.

"You can definitely see the difference," Mourning said. "It feels good to have everybody back on the court."

Miami, which had lost six of seven on the road, was 12-for-16 from beyond the 3-point arc, including a 6-for-8 performance by Hardaway and a 3-of-4 showing by Jamal Mashburn.

"I knew it was inside of us," coach Pat Riley said. "No doubt about it, we played about as good a road game as you can play."

Hardaway finished with 23 points, Mourning had 21 and Mashburn 20. Hardaway, 25 games into his return from a jammed right knee, also had 12 assists, two steals and just one turnover in 40 minutes.

"That's as good as I've felt since I came back," said Hardaway, who added that he got up early Sunday to prepare for the game. "I sensed I wasn't playing well, up to my capabilities, and I needed to get ready and get my mind focused."

Majerle, returning to Miami's lineup after being on the injured list since Jan. 25 with a stress fracture of the left fibula, had nine points, five rebounds and three assists in 31 minutes.

When his day's work was finished, he got some friendly ribbing from Mourning.

"I saw Dan at the end of the game, sitting on the bench with his tan and everything," Mourning said, breaking into a big grin. "And I said, 'Man, how was your vacation?' We started laughing, but then I told him I was glad he's back."

Charlotte fel behind by 16 points in the first quarter but rallied, only to be held without a field goal in the final three minutes of the game.

"Miami knows how to win. They've been there and we're learning how to get there," Charlotte coach Paul Silas said. "It's a learning experience for us."

The Hornets, dropping to 21-5 at home, got 18 points and six assists from Eddie Jones.

There were three ties and three lead changes in the fourth quarter before Majerle hit a 3-pointer from the left wing to put Miami up 82-79 with 2:26 remaining.

Charlotte got one free throw from Elden Campbell at the 2:04 mark but would not score the rest of the way, missing its final three field-goal attempts.

Hardaway missed the second of two free throws at the 4-second mark and Charlotte got the rebound and called a timeout with 2.3 seconds left and the Heat up 83-80. But Anthony Mason was called for a five-second violation on the inbounds pass, giving the ball back to Miami.

Hardaway sealed it with a pair of foul shots.

"The play took longer than expected," Charlotte's David Wesley said of the failed inbound attempt. "We just didn't get the options. We need to get right to it and take care of business."

The Heat opened the game by hitting 10 of 14 field-goal attempts, including all four tries from beyond the 3-point arc, for a 24-8 lead. But Miami closed the half by missing 20 of 26 shots, allowing the Hornets to rally for a 44-all tie.